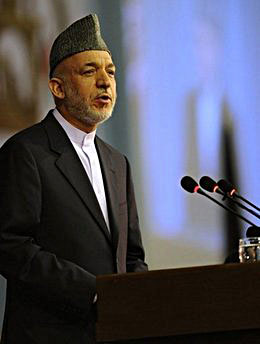 On Wednesday, Jon Boone of the Guardian reported on the hottest topic of conversation in Afghanistan right now: the sudden resignations of Amrullah Saleh, head of the National Directorate of Security, and Hanif Atmar, the interior minister, from the government of Hamid Karzai:

[Saleh] has said little about why he quit, other than that the Taliban attack on last week’s peace jirga or assembly in Kabul was for him the “tipping point”…. According to Saleh’s aides, the final straw came last Sunday when Karzai apparently questioned his loyalty during a stormy meeting at the presidential palace, appearing not to believe Saleh and Atmar’s account of how two insurgents armed with rocket launchers, one dressed as a woman, were able to get so close to a meeting of 1,600 national leaders.

Saleh’s colleagues say that Karzai even accused the two men of a plot with the Americans and the British to wreck his peace plan.

Saleh’s friends say that, because Karzai believes NATO is unable to deal with insurgent sanctuaries on the eastern border, he is looking for an alternative strategy: rather than use western support to “harden” Afghanistan against its neighbour, he is instead striking a less robust attitude to Pakistan and the Taliban.

This has gotten surprisingly little attention in the American press, but on Friday Dexter Filkins of the New York Times added a few more details:

Two senior Afghan officials were showing President Hamid Karzai the evidence of the spectacular rocket attack on a nationwide peace conference earlier this month when Mr. Karzai told them that he believed the Taliban were not responsible.

“The president did not show any interest in the evidence — none — he treated it like a piece of dirt,” said Amrullah Saleh, then the director of the Afghan intelligence service.

….Underlying the tensions, according to Mr. Saleh and Afghan and Western officials, was something more profound: That Mr. Karzai had lost faith in the Americans and NATO to prevail in Afghanistan….“The president has lost his confidence in the capability of either the coalition or his own government to protect this country,” Mr. Saleh said in an interview at his home. “President Karzai has never announced that NATO will lose, but the way that he does not proudly own the campaign shows that he doesn’t trust it is working.”

According to Boone, Karzai’s change of heart has been a year in the making: “His views were crystallised in the aftermath of last year’s election when millions of votes were found to be fraudulent; Karzai blamed the US, UK and United Nations for the fraud.”

I haven’t seen too much more reporting about this, so it’s hard (as usual) to decipher what’s going on. Part of it probably has to do with tribal loyalties: Saleh is a Tajik and a longtime foe of the primarily Pashtun Taliban. Karzai, as an ethnic Pashtun, is more open to finding some kind of working compromise with them. Beyond that, Karzai probably has some quite reasonable doubts about both America’s willingness to stay in Afghanistan very much longer and about the prospects for our counterinsurgency strategy to defeat the Taliban. Given that, some kind of compromise with the Taliban and with Pakistan might be his most realistic hope for survival right now.

Anyway: read both pieces. As always, it’s too murky to know for sure what’s happening, but one thing seems fairly clear: Gen. Stanley McChrystal’s upcoming military operation (or “process” as it seems to be called now) in Kandahar is pretty much our last chance to demonstrate that we can deal with the Taliban effectively. If it doesn’t work, American troops are going to pull out and Karzai is going to go his own way. And right now, given that the strategy depends not just on defeating the Taliban but on turning things over quickly to plainly unqualified Afghan troops, the odds of success don’t look so good. My prediction: a couple of Friedman Units from now, Obama and Karzai are going to find some colorably face-saving way to declare that America has done everything it can and it’s time for Afghans to take responsibility for their own future. Our longest war will draw to a sputtering close with neither victory nor defeat, and a decade from now we’ll all be wondering why we were ever there.

UPDATE: Jonathan Bernstein wants to know what I meant by the last sentence:

Wow. I’m not even to the point of disagreeing — just real surprised. I guess I’d like to hear more of what he’s thinking. Is it that in a decade, the September 11 attacks will fade from memory? That they’ll be remembered, but we’ll think less of their importance? That we’ll think the decision to go into Afghanistan didn’t follow logically from those attacks? That we’ll think that deployment in Afghanistan made sense at first, but that the troops should have been gone as soon as the Taliban was first defeated? And one of those won’t just be a fringe left (or right) position, but what “we’ll all” be wondering?

I didn’t mean to be cryptic. I was just heading out to lunch when I finished up this post. Sorry.

Obviously I don’t mean that we’ll have forgotten 9/11. All I meant was that pretty much everything we’ve done in Afghanistan has been a wasted effort aside from kicking out al-Qaeda after the initial invasion. In the fairly near future, I suspect that we’re going to wonder what we were doing there for a decade after that and what we thought we could accomplish. Needless to say, though, Stanley McChrystal could yet prove me wrong.