Carol Leonnig writes in the Washington Post today that many corporations are eager to start funding political ads now that the Supreme Court has ruled that this is legal:

These companies include firms on Wall Street and in the energy sector opposed to stricter regulations as well as fast-food franchise owners fearful of being forced to unionize their shops. They just don’t want to be singled out — or have their corporate logo attached.

Some fear the rules on corporate election activities could change, leaving their company exposed; a White House-supported bill likely to be voted on by the House after the Memorial Day recess would require calling out by name the corporations that 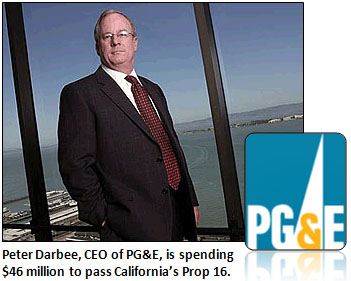 fund campaign ads. Republicans, who generally rely more heavily on donations from big-business executives, say that Democrats are trying to silence the political speech of corporations with the bill.

….Big corporations are the new whipping boys in the wake of taxpayer-financed bailouts, Republican operatives argue. They say chief executives can’t take to the public square to share their unpopular views on legislation without being personally attacked or — worse — dismissed. “You want to speak your peace without political retribution,” said David N. Bossie, president of the conservative group Citizens United, whose fight to air its video critical of Hillary Rodham Clinton led to the Supreme Court’s ruling.

This is ridiculous. If you’re in the arena, you’re in the arena — and that means your opponents get to fight back. If you’re afraid of that, then you’d better stay out of politics. We already have too little transparency when it comes to political advertising, and the last thing we need is to allow even less.