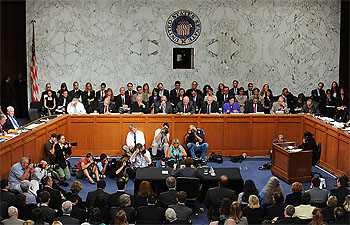 Supreme Court confirmation hearings are little more than figurative jokes these days, but the LA Times tells me that today’s questioning of Elena Kagan was literally a joke:

Perhaps no amount of cramming could have readied her for the question asked of her by Republican Sen. Tom Coburn of Oklahoma: Can the government, he wondered, pass a law forcing Americans to eat fruits and vegetables?

To Kagan, at first blush, the question must have seemed absurd, maybe even a joke. “It sounds like a dumb law,” she replied off the cuff. Then, realizing Coburn was serious, she segued into sort of the windy, contextual, cautious analysis that she has employed to answer most of the questions asked of her over the last two days.

But she had fallen into Coburn’s trap by answering more like the law professor she is than by simply responding like most people would. She never just said: “Of course it can’t.”

Within hours, a video detailing the exchange was atop the Drudge Report website, hundreds of thousands had viewed it on YouTube, and conservatives were having a field day. Her equivocation fit ideally with the narrative Republicans are trying to fashion during these hearings — a story of a federal government out of control and a Congress running amok.

We are truly ruled by idiots. At least, we will be if Republicans win control of Congress in November. Be afraid. Be very afraid.