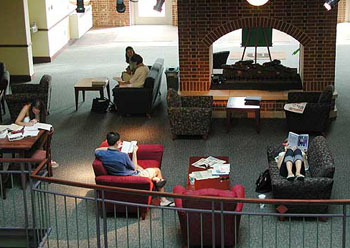 An MIT professor emailed me a Boston Globe story this morning about how lazy college students have become lately. Here’s the nut of the thing:

The decline, Babcock and Marks found, infects students of all demographics. No matter the student’s major, gender, or race, no matter the size of the school or the quality of the SAT scores of the people enrolled there, the results are the same: Students of all ability levels are studying less.

Aha! The internet is sapping our precious bodily fluids. Tivo and 500 channels of TV are sucking up all our kids’s time. Facebook and Twitter have made it impossible for them to concentrate. Except….hold on a second:

According to their research, the greatest decline in student studying took place before computers swept through colleges: Between 1961 and 1981, study times fell from 24.4 to 16.8 hours per week (and then, ultimately, to 14).

Hmmm. The drop from 16.8 to 14 over the past 30 years is pretty trivial. This change happened almost entirely about 40 years ago, so this has nothing at all to do with growing up in the digital age. Babcock and Marks, it turns out, agree, and they also say that neither changing demographics nor changing employment patterns are to blame. So what is it? Their answer, basically, is that professors have gotten lazy and don’t really feel like going to the trouble of challenging their students. After all, this gets them nothing but grief: lots of work to grade, unhappy students, and lousy teacher evaluations. Why bother?

My MIT correspondent doesn’t think much of this theory — though from his email it’s unclear if he disagrees about students studying less or if he disagrees about blaming professors for this state of affairs — and I, of course, don’t have a clue since I’m neither a recent student nor a professor. My own experience isn’t instructive: when I was at Caltech in the late 70s, I’d guess that I probably did indeed study 20-30 hours a week. When I left and transferred to Cal State Long Beach — about as far away from Caltech on the quality spectrum as you can get — I very much doubt that I studied more than 10-15 hours a week. That’s hardly surprising, of course. And it tells us nothing.

So then: comments? This isn’t Crooked Timber, but I know I have plenty of professors and current students who read this blog. If you’re a student, how much studying do you do? If you’re an instructor, does this seem to have changed much in the recent past? Let’s gather some data, people.