Aaron Carroll writes today that we’re addicted to new drugs even though older drugs are often just as good or better than the new ones. The problem is that 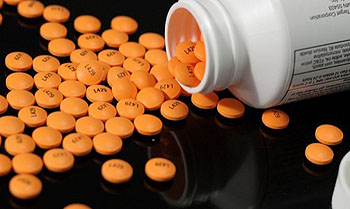 we don’t usually know this for sure since comparative studies are rare. However, a few years ago one was done for blood pressure medications:

There were so many drugs to choose from for this trial (at different costs) that the National Heart, Lung, and Blood Institute (NHLBI) primarily organized and supported a randomized, controlled trial to examine which was best. This study was enormous; it took place in 623 centers in the United States, Canada, Puerto Rico, and the U.S. Virgin Islands between 1994 and 1998, and included over 33,000 participants. Patients received one of four drugs:

The last of these, the diuretic, was the oldest of the drugs, and by far the cheapest. However, at the end of the study, the results were clear. This old, cheap diuretic was significantly better at preventing at least one of the major types of cardiovascular disease when compared to the other, newer drugs. Since the diuretic was also significantly less expensive, it should be the drug of choice in initial treatment of high blood pressure. However, it usually is not.

I’m glad to hear it! My blood pressure has been slowly rising for the past few years, and last year my doctor decided I should start taking something for it. At first she recommended a beta blocker, but as we talked about it she said something that made me a little nervous (I don’t remember quite what). “You know,” I said, “I actually have a strong preference for the oldest, cheapest, best studied drugs around.” She looked slightly surprised, but said that was perfectly reasonable and immediately prescribed a diuretic. I’ve been taking it ever since. (And, yes, I try to watch my sodium intake too.)

The whole post is worth reading. Sometimes new drugs are great, but I’m willing to bet that we waste upwards of a quarter to a third of the money we spend on pharmaceuticals because both doctors and patients have been brainwashed to always want the latest and greatest. But me? I like drugs that have been really well studied and are known to have infrequent and well understood interaction effects. In fact, new drugs actually make me kind of nervous. I am an insurance company’s dream patient.