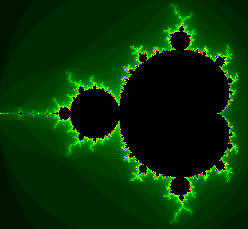 You’ve all heard of the Mandelbrot set, right? It’s the fractal image shown on the right. It looks pretty ordinary, but if you zoom in you start to see a lot more detail. Zoom some more, and there’s even more detail. You can zoom forever, and you’ll keep finding more detail no matter how fine a microscope you use, much of it surprising and unpredictable. (Try it!)

So how far down can you go? Last year’s “flash crash,” which saw the Dow plummet nearly a thousand points in a few minutes, was widely blamed on high-frequency traders who use computer algorithms to execute trades at very high speeds, and that made some folks at Nanex curious about what was really going on. Alexis Madrigal tells the story:

Most stock charts show, at best, detail down to the one-minute scale, but Nanex’s data shows much finer slices of time. The company’s software engineer Jeffrey Donovan stared and stared at the data. He began to think that he could see odd patterns emerge from the numbers. He had a hunch that if he plotted the action around a stock sequentially at the millisecond range, he’d find something. When he tried it, he was blown away by the pattern. He called it “The Knife.”

….High-frequency traders do employ algorithms to look for patterns in the market and exploit them, but their goal is making winning trades, not simply sending quotes into the financial ether….The algorithms we see at work here are different. They don’t serve any function in the market. University of Pennsylvania finance professor, Michael Kearns, a specialist in algorithmic trading, called the patterns “curious,” and noted that it wasn’t immediately apparent what such order placement strategies might do.

Donovan thinks that the odd algorithms are just a way of introducing noise into the works. Other firms have to deal with that noise, but the originating entity can easily filter it out because they know what they did. Perhaps that gives them an advantage of some milliseconds. In the highly competitive and fast HFT world, where even one’s physical proximity to a stock exchange matters, market players could be looking for any advantage.

Donovan calls these patterns “crop circles,” and he gives them all names: Castle Wall, The Waste Pool, Depth Ping, Boston Shuffle, BOTvsBOT, etc. Most of them involve sending out thousands of quotes per second, and you can see them all here. If Donovan is right, this isn’t even high-frequency trading, which is iffy enough. It’s high-speed quote stuffing and market spoofing designed primarily to screw up other traders, something that John Bates, a former Cambridge professor and the CTO of Progress Software, calls “algorithmic terrorism.” That’s a wee bit melodramatic, but it’s still a nasty look at what’s happening in our financial markets these days. This kind of behavior is hardly new, but it’s certainly gotten a lot faster and a lot harder to detect.