Matt Yglesias put up a chart today showing that unemployment is high among the less educated but pretty low among the well educated. Then this comment:

Virtually every single member of congress, every senator, every Capitol Hill staffer, every White House advisor, every Fed governor, and every major political reporter is a college graduate. What’s more, we have a large amount of social segregation in the United States — college graduates tend to socialize 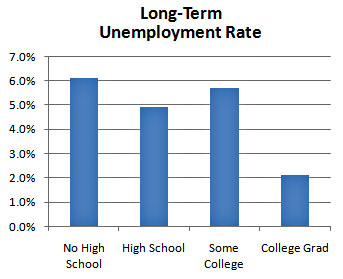 with each other. And among college graduates, there simply isn’t an economic crisis in the United States.

Here’s another chart that, if anything, makes this point even more strongly: it shows the rate of long-term unemployment by educational level. I had to cobble it together with an interpolation or two,1 but I think it’s pretty close to the mark, and what it shows is that for those with a high school diploma or less, the long-term unemployment rate is about 5-6%. If this is the social class you hang out with, then out of a circle of a few dozen friends and acquaintances you probably personally know four or five who are currently out of work, and of those perhaps two or three who have been out of work for six months or more and are getting truly desperate.

Being out of work for a few weeks — or even a couple of months — is bad but not debilitating. It’s long-term unemployment that makes people profoundly fearful and discouraged. But among the college-educated crowd, it barely exists. The fear just isn’t there, and that makes it awfully easy to ignore.

1I’m not sure why BLS doesn’t make this stuff more easily available. If anyone has the raw data for this and can provide exact numbers, let me know.