Paul Krugman on the Republican jihad to extend the portion of the Bush tax cuts that affect the rich:

This has nothing to do with sound economic policy. Instead, as I said, it’s about a dysfunctional and corrupt political culture, in which Congress won’t take action to revive the economy, pleads poverty when it comes to protecting the jobs of schoolteachers and firefighters, but declares cost no object when it comes to sparing the already wealthy even the slightest financial inconvenience.

So far, the Obama administration is standing firm against this outrage. Let’s hope that it prevails in its fight. Otherwise, it will be hard not to lose all faith in America’s future.

What really gets me about this whole thing is that conservatives are barely even trying to defend their position. As Krugman says, they talk a bit about the impact on small business owners, but this is so transparently flimsy you can almost sense their embarrassment when they bring it up. And then there’s sort of a pro forma insistence that raising taxes a few percentage points on the wealthy would stall the economic recovery, but there’s virtually no evidence for this. In fact, just the opposite. A small tax increase on the rich would probably have the smallest economic effect of practically any revenue-raising policy you can imagine. It would barely be measurable.

There really is, literally, no reason to favor extending Bush tax cuts for the rich except purely as a gift to the rich. As the Tax Policy Center chart below shows, the million-dollar crowd would get a 3.3% income boost and the ten-million-dollar crowd would get a 5.8% boost in their incomes. And the deficit would increase by the better part of a trillion dollars. That’s it. That’s all that would happen if the top end cuts were extended.

I sure wish there were a political movement that cared as much about the $50,000 crowd as the conservative movement does about the million-plus crowd. I wonder what we’d call it? 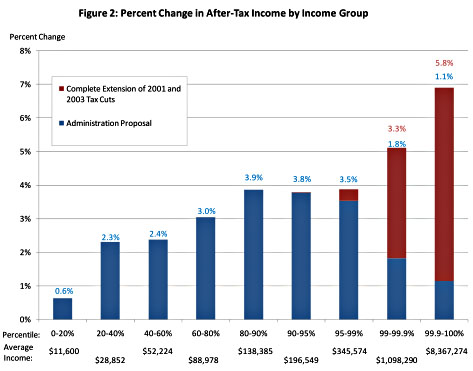