Paul Mirengoff thinks the 2012 Republican nomination for president is Sarah Palin’s to lose. He bases this on four assumptions: 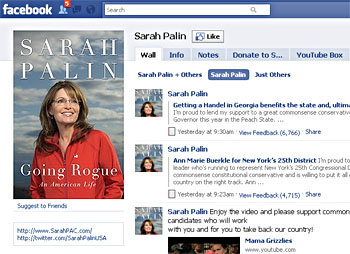 count of 30 to 40 percent in crowded early primaries to the front of the pack and then increase that count to 50 percent plus as the field narrow in the later primaries.

It would be a real mistake, I think, to see [Christine] O’Donnell’s victory as somehow presaging one by Palin. As Mirengoff concedes, Palin, if she runs for president, won’t be running against Mike Castle. Primary voters may also behave differently when the stakes are higher. Taking a gamble on a Senate candidate who might not be able to win is different from taking a gamble on a presidential candidate. That doesn’t mean Palin can’t win. But the conventional wisdom — that the race is wide open — just may be correct.

I’m stonkered on this. A few months ago I was convinced that Palin wouldn’t run at all, so it was a moot point. Now I’m not so sure. After all, she’s been acting an awful lot like a presidential wannabe lately, hasn’t she?1 And Lord knows that plenty of people with less chance than her have been talked into running by friends and consultants with a seductively persuasive scenario for victory.

So let’s say she runs. Can she win? On the plus side: she has lots of name recognition, a proven ability to raise money, a loyal core of followers, and tons of charisma.

But then there’s the minus side: she’s extremely polarizing, she won’t get to hide behind Facebook and Twitter if she’s running for president, she’s never shown much patience for the kind of organization that a presidential run requires, her opponents will be able to make a powerful case that she’s unelectable in November, and she seems almost certain to make at least one major gaffe in the early stages of the campaign.

So I just don’t see it. In fact, the only real winning scenario I see for Palin is one in which nobody credible really feels like running and Palin ends up getting the nomination by default as sort of a suicide run against an incumbent who’s going to crush her. But I don’t really see that either. I happen to believe that Obama is probably unbeatable in 2012, but there are hardly any Republicans who agree with me. They all think Obama is a dead man walking and they’re almost certainly going to want to nominate someone who can beat him. Palin just isn’t that person.

1And that was before I saw this. Apparently she’s been acting even more wannabe-ish than I thought.