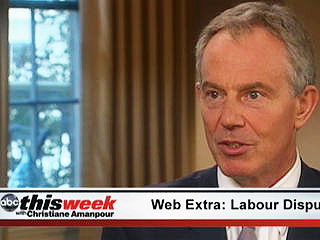 A couple of days ago on This Week, Tony Blair made the fairly unoriginal observation that lefties tend to engage in circular firing squads a lot:

“I love my own politics and progressives and all the rest of it,” Blair told ABC’s Christiane Amanpour in an unaired portion of his This Week interview from Sunday. “But if we have a weakness as a class, when the right get after us and attack our progressive leaders, instead of defending them we tend to say, ‘Yeah, well, really we’ve got a lot of complaints about them, too.'”

Blair said that the tendency of the left to pile on rather than defend its own leaders can leave their politicians alone to face the right wing attack machine, which Blair says is merciless. “It doesn’t matter how well intentioned you think you are,” Blair said of the right. “They’re going to go for you completely.”

“And then the interesting thing is, the progressives say, ‘Hey you’re not being progressive enough! Why don’t you do more for us?'” Blair added. “And so you can end up in quite an isolated position if you’re not careful.”

The general political dynamic consists of Republicans decrying socialism, liberals denouncing a sell-out, and moderate deficit hawks clucking that the deficit hawkery doesn’t go far enough….As I’ve stated many times, the overwhelming cause of the Democrats’ perils is that they held overstretched majorities while taking control of government at the outset of a massive economic crisis. But the inability of the left to handle majority status is an important contributor to the dilemma. It’s not surprising that Democrats would lose independent voters, or that Republicans would be wildly enthusiastic, when they control the government and push agressive reforms during an economic calamity. But the sheer sullenness of the liberal base does seem to be avoidable and puzzling.

I guess I find this less puzzling than Jon since I bounce around on this a lot myself. Yes: a big stimulus, healthcare reform, financial reform, and a drawdown in Iraq are pretty significant accomplishments by any measure, and especially significant accomplishments given the political atmosphere. But: there’s also the escalation in Afghanistan, a weak record on civil liberties, the reappointment of Ben Bernanke, aggressively centrist choices for the Supreme Court, and a seeming unwillingness to take on Republican intransigence in a really full-throated way. There’s just no way that a committed liberal isn’t going to be a little discouraged by all this stuff.

At the same time, contra Blair, it’s not as if this is solely a liberal problem. Conservatives were unhappy with Reagan in 1982, unhappy with Bush Sr. in 1990, and unhappy with Bush Jr. in 2006. (And unhappy with a succession of Tory leaders in Britain over the past couple of decades.) Maybe it’s just the way things go, and political bases are never happy.

But….I dunno. It sure feels a little different with Obama. Other presidents at least seem to have always paid lip service to their base, and that’s better than nothing. Obama seems allergic to the whole concept. My mind tells me why (the liberal base is too small and Democrats have to rely heavily on leaners and centrists to win), but my gut still has a hard time with it. Long story short: I don’t think the liberal base is too stupid to understand that liberal politicians have to compromise a lot, it’s just that they’d just like to feel more certain that liberal politicians really would like to do more and are compromising because they don’t have any choice. It doesn’t seem like so much to ask.