Ezra Klein says he was impressed with Mitch Daniels’ op-ed today in the Wall Street Journal that spelled out his plan for economic prosperity. So I hopped over to take a look. I guess I’m — well, let’s say I’m a wee bit less impressed.

Here’s the nickel version: reduce taxes, rescind TARP spending, cut federal pay 10% across the board, and slash regulations. Bold! Innovative! Daniels’ plan calls for reducing payroll taxes, which I guess is an improvement over jumping on the 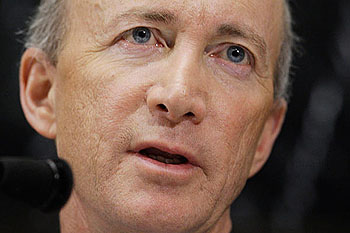 usual Republican bandwagon for tax cuts on the rich, but there’s not much else good that can be said for it. It’s the same old same old.

Which is OK, I guess. After all, my plan is the same old same old too: I don’t care all that much how we do it, but we need higher deficits right now, not lower ones. Daniels’ plan simply has no stimulative power at all, even in theory. And no matter how often he repeats the same stale bromides, it’s simply not true that we’re going the way of Greece; it’s not true the federal spending hasn’t worked; it’s not true that healthcare reform is holding back job creation; and it’s not true that businesses are afraid to spend because of uncertainty over new regulations. What’s holding back the economy is that lots of people are out of work, lots more people are cutting back in order to pay down debt, and the result is sluggish consumer demand. We need more money in circulation, not less. Daniels is selling the same tired economic snake oil as every other Republican in the country, and it won’t work. This isn’t worth getting impressed over.

Wow, look at that! You have a plan! With numbers! Hooray for you!….Sure, you rely on magical Constitutional thinking and empirically false analysis of federal pay. And your savings only make it 9% of the way to your stated goal. And the four revenue offsets you promised is really only three offsets plus one unrelated ideological hobbyhorse. But it was a good try. Look at Sarah Palin and Newt Gingrich over there — they fell down after only a few yards! You should really think about running for president.

UPDATE 2: Ezra goes back to the well to defend Daniels here. I think maybe I’m even less impressed now. Let’s review the bidding:

So which is it? Ezra says he’s making calls to figure that out. But come on. Daniels knows perfectly well how to use the English language. He’s either deliberately fibbing about the size of his spending cuts so that his Journal readers won’t realize he’s proposing a gigantic piece of deficit-driven stimulus, or else he’s deliberately trying to trick budget wonks with his use of the word “emergency” and doesn’t actually have the slightest intention of backing any proposal that isn’t deficit neutral.

This is simple stuff. If Daniels means one or the other, he can say it easily enough. Until he clears this up in plain English, I remain unimpressed.

So this is a deficit-neutral tax cut of medium size. It would almost certainly have no noticeable effect on the economy at all.