Rep. Boehner has proposed limiting total discretionary funding for fiscal year 2011 to $1.029 trillion […] while setting funding levels for defense, military construction, veterans, and homeland security at the same levels that President Obama’s 2011 budget requests for those areas. According to CBO, the President proposes $673 billion for the defense (other than funding for the wars) and veterans parts of the budget (the “budget 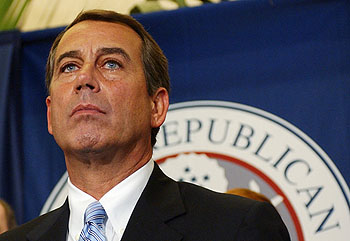 function” for those areas) and the Department of Homeland Security. This leaves $356 billion for “non-security” discretionary funding under the Boehner plan.

First things first. What’s remarkable here is what Boehner doesn’t want to do. Out of a total federal budget of about $3 trillion (not counting temporary stimulus spending), he puts almost all of it off the table immediately. He proposes no cuts to Social Security, Medicare, defense spending, overseas wars, or homeland security, and along with interest on the national debt that accounts for nearly 85% of the total budget.

So what’s left? About $450 billion, which accounts for a grand total of 15% of the federal budget. That’s not much, so in order to make a splash Boehner has to propose some pretty swinging cuts. But on what? Transportation? Energy? Agriculture? The Department of Justice? The EPA? NASA? Food stamps? He doesn’t say.

And since Republicans have been in office before, after all, we know perfectly well what their spending priorities are. And they don’t include swinging cuts to transportation or energy or agriculture or the FBI or NASA. This is, in other words, a joke. Boehner isn’t just proposing a bit of trimming here and there, he’s proposing truly massive cuts to a tiny sliver of the budget. And we all know that neither he nor the rest of his party will even pretend to follow through on this if they’re elected.

But $70 billion a year in tax cuts for the rich? That seems like a pretty good bet. In the meantime, Jon is right: the media should treat Boehner like a grownup and ask him exactly how his plan adds up. If he has the guts to tell us, well and good. If not, then it’s time to stop taking him seriously.