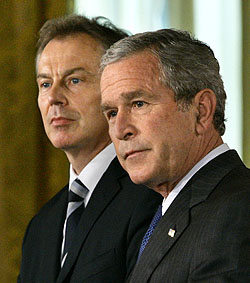 One of the most ludicrous caricatures of George is that he was a dumb idiot who stumbled into the presidency. No one stumbles into that job, and the history of American presidential campaigns is littered with the corpses of those who were supposed to be brilliant but who nonetheless failed because brilliance is not enough….

And then there are the other times:

In his new book, A Journey, Mr Blair writes that the former US president was confused by the presence of Guy Verhofstadt at the 2001 G8 summit in Genoa.

“He didn’t know or recognise Guy, whose advice he listened to with considerable astonishment,” Mr Blair writes. “He then turned to me and whispered, ‘Who is this guy?’ ‘He is the prime minister of Belgium,’ I said.

Belgium? George said, clearly aghast at the possible full extent of his stupidity. ‘Belgium is not part of the G8’.”

Mr Blair explained to Mr Bush that Mr Verhofstadt was there as “president of Europe”. Belgium held the presidency of the EU council at the time.

Mr Bush responded: “You got the Belgians running Europe?” before shaking his head, “now aghast at our stupidity”, Mr Blair writes.

OK, fine. This doesn’t mean Bush was dumb. Just….what’s the right word to describe this? Uninformed? Incurious? Provincial? “A simplicity that is the product of a decisive nature”?1 I mean, I know the guy was good at recognizing people, so it’s not that. I guess he just didn’t give a damn.

But I admit that this is mostly just an excuse to have fun taking a potshot at Bush. I kinda miss that. Sarah Palin is too easy a target.

1Really, you have to give Blair credit for this phrase. I wonder how many alternatives he had to cross out before he came up with it? What it means, obviously, is that Bush was a shallow idler who was allergic to learning any actual facts that might get in the way of doing whatever he wanted to do in the first place. But Blair’s formulation sounds so much better, doesn’t it?