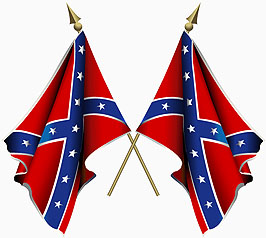 Jeffrey Goldberg asked Mississippi governor Haley Barbour recently whether he thought the Republican Party could ever attract the support of African-Americans as long as party officials like Barbour continued to celebrate the old Confederacy. Unsurprisingly, Barbour wasn’t keen to reply:

The true, spin-free, answer, obviously, is that the Republican Party would rather not risk offending mythopoetic white Southerners by calling the Confederacy what it actually was — a vast gulag of slavery, murder and rape. As an electoral strategy, it’s a fine one — an immoral one, but a practical one, something that has worked for the Republicans for more than 40 years (though the gains it has made in the South have been tempered by losses in the Northeast and elsewhere). But what I don’t understand is why African-Americans, in the south as well as the north, don’t simply rise up as a collective and say: No more. That’s it. Stop the veneration of evil men.

Just imagine if this discussion was about the Holocaust. Do we really think the world would allow Germany to venerate the Nazis? Well, slavery was the Holocaust of the African-American experience, and yet, here we are, listening to respectable governors of large southern states rationalize the celebration of evil.

For what it’s worth, I’d say Germany is the exception, not the rule, here. Most countries with sins in their past have mixed feelings about it, from French veneration of Napoleon to the longstanding Turkish insistence that no genocide of Armenians ever took place to the Japanese supernationalists who have long baited their politicians to visit Yasukuni Shrine every year. I suspect the almost unanimous German condemnation of the Hitler era is fairly unique in history, partly due to the sheer intensity of its evil and partly due to the fact that it was so short-lived. Unlike the other examples, it was never around long enough to become associated with an enduring cultural or nationalist tradition.

But guess what? Things can change even where enduring cultural and nationalist traditions are at work. Just a few months ago, Japanese prime minister Naoto Kan announced his decision not to visit the Yasukuni shrine on the anniversary of the end of World War II this year. Ditto for the rest of his cabinet. “As Class-A war criminals are enshrined there,” he said, “an official visit by the prime minister or cabinet members is problematic. I have no plans to make a visit during my tenure.” He seems to have survived this decision just fine. Maybe Haley Barbour should take note.