Yesterday Paul Krugman argued that if Democrats had enacted a bigger stimulus in 2009, they’d be looking at manageable losses next week instead of huge ones:

Could the administration have gotten a bigger stimulus through Congress? Even if it couldn’t, would it have been better off making the case for a bigger plan, rather than pretending that what it got was just right? We’ll never know.

What we do know is that the inadequacy of the stimulus has been a political catastrophe. Yes, things are better than they would have 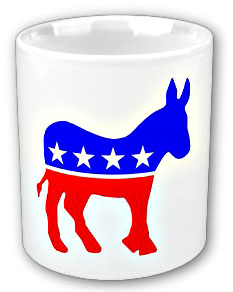 been without the American Recovery and Reinvestment Act: the unemployment rate would probably be close to 12 percent right now if the administration hadn’t passed its plan. But voters respond to facts, not counterfactuals, and the perception is that the administration’s policies have failed.

There’s something about this argument that bugs me. It’s not that it’s wrong, it’s just that it’s exaggerated. A bigger stimulus almost certainly wouldn’t have saved the Democrats’ bacon. Here’s what I mean:

If this is in the ballpark, it means that with a bigger stimulus bill unemployment today would be 9%, not 9.6%. That would have been well worth the price, but just because it was worth doing doesn’t mean it would have made a big electoral difference. Unemployment of 9% is still enormously high, and almost certainly well above the point at which voters start to freak out. You can make similar arguments for GDP growth, disposable income, or any other economic statistic. A bigger stimulus might have made a difference, but it just wouldn’t have been big enough to change the dynamics of next week’s elections other than very modestly.

Now, if Democrats end up losing control of the House by three seats, the potential for even a modest improvement will seem like a pretty big deal. Still, modest is modest. It’s most likely true that the stimulus was too small, but like every other electoral just-so story, it probably doesn’t explain as much as you might think.

UPDATE: In comments, several people suggest that the real issue is that the stimulus should have been bigger and better. About 40% of the stimulus was in the form of tax cuts, which have a low fiscal multiplier. So if the stimulus had been $1.2 trillion, and all of it had been spending, we might be talking about a difference of two points of unemployment, not 0.6 points.

That might be true. It depends a lot on estimates of fiscal multipliers, which are pretty tricky because there’s so little empirical evidence available on the subject. Still, the argument for a bigger and better stimulus is definitely stronger than the argument for a merely bigger stimulus.

(Unless, of course, you’re talking about a truly gargantuan stimulus. But in that case, you’re really talking pie in the sky. There just wasn’t support in Congress for that.)

The other main contention in comments is that Obama did a lousy job of setting expectations so that he could go back for more money if the economy didn’t respond the way he thought it would. I’m less sympathetic to this argument. Given Republican obstructionism, I simply don’t think Obama ever had a chance of getting a significant amount of additional stimulus after the first package passed. Even the meager $150 billion the House passed in late 2009 never went anywhere, and I doubt that different rhetoric from Obama would have affected that much.