Yesterday I wrote about Third Way’s proposal to send taxpayers an annual “receipt” showing them roughly where their tax dollars go. I thought it sounded like a good idea that just about everyone could support, but ended with a rhetorical question: “And yet, I’ll bet that neither party would actually be in favor of this. Why do you suppose that is?” Matt Steinglass comments:

I’m sure Mr Drum meant this as a rhetorical question, but I’m too dumb to immediately get the rhetorical answer, so I had to think about why this might be the case. If it is the case, I can think of two explanations. One is that there’s uncertainty about which side the change would benefit: Democrats think it would 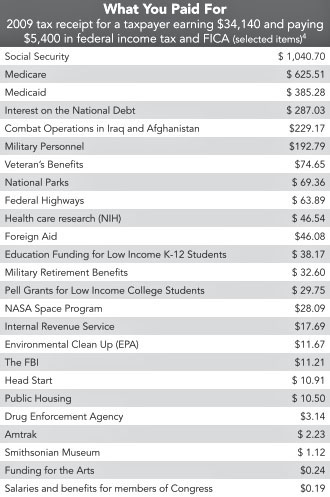 benefit Republicans, while Republicans think it would benefit Democrats. One of the two propositions is in fact correct, but either one party is simply guessing the odds wrong, or both parties are too risk-averse to find a zone there where they’re comfortable placing a bet.

This is indeed what I had in mind, but I’d rephrase it a bit. First, though, some background.

Several years ago I got interested in behavioral economics in general and its roots in prospect theory in particular. Prospect theory, developed by Daniel Kahneman and Amos Tversky in the late 70s, tries to describe the way real-world people react when faced with risky choices, and it’s largely based on empirical data gathered via lab experiments. There are several fascinating components to prospect theory, but the one that’s influenced me the most is also the simplest: when faced with a choice, people are far more motivated by loss aversion than by risk aversion.

Basically, what this means is that the emotional distress you suffer from losing, say, $100, is much greater than the emotional lift you get from winning $100. Losses always loom larger than gains. Here’s an example:

If you give people the choice between a sure $100 vs. a 50% chance of winning $300, most won’t take the gamble. This is hard to explain since the odds say that you should expect to win $150 from taking the bet. At first, this seems like a case of people being risk averse.

But now let’s switch it around. Give people a choice between a sure loss of $100 vs. a 50% chance of losing $300. This time most people will take the bet. Why? This case is mathematically identical to the first one, so they can’t both be explained by risk aversion. What does explain them is loss aversion. Most people hate the idea of a sure loss and will reject bets that make them give something up (Case 1) but accept bets that give them a chance to avoid giving something up (Case 2).

The power of loss aversion is one of those insights that seems painfully obvious after someone else points it out, and once you start looking for it you can see it in all walks of life. People are simply not willing to risk losing something they already have unless they’re promised a credible chance of a much larger gain. This explains a lot of otherwise odd behaviors, and it explains why neither Democrats or Republicans are likely to embrace the idea of the taxpayer receipt. Budget allocations are a relatively zero-sum game in the short term, and both sides would have to believe that the odds of getting the other guy’s goodies is overwhelmingly in their favor before they’d agree to anything that puts their existing goodies at risk. So it’s not just a matter of both sides mistakenly thinking the taxpayer receipt is more likely to benefit the other side and therefore shying away. Even if both sides are modestly optimistic about their chances of outgunning the other side, the prospect of a loss is still too daunting. So they won’t do it.