There’s something odd about this:

The Senate on Tuesday approved the biggest overhaul to the nation’s food safety laws since the 1930s, voting 73 to 25 to give vast new authorities to the Food and Drug Administration; place new responsibilities on farmers and food companies to prevent contamination; and — for the first time — set safety standards for imported foods, a growing part of the American diet.

….Despite strong bipartisan support and backing from a diverse coalition of major business and consumer groups, the bill was been buffeted by politics in recent weeks. It drew fire from some tea party activists, 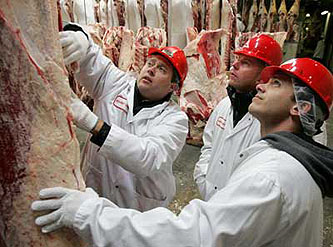 who see it as government overreach. On his television program this month, talkshow host Glenn Beck suggested that the measure was a government ruse to raise the price of meat and convert more consumers to vegetarianism.

If there’s one thing that Republicans have been plain about, it’s their opposition to the Democratic agenda of big government and job-killing regulations. Thus you have the tea party and Glenn Beck hostility to this bill. And yet it passed 73-25. A massive overhaul of the FDA’s regulatory authority got not just one or two Republican votes, but 15. In fact, according to the New York Times, this bill was the first one in two years that managed to produce a bit of bipartisan comity: “Some Republican and Democratic Senate staff members — who in previous terms would have seen each other routinely — met for the first time during the food negotiations. The group bonded over snacks: specifically, Starburst candies from a staff member of Senator Mike Enzi, a Wyoming Republican, and jelly beans from a staff member of Senator Richard J. Durbin, an Illinois Democrat.”

I don’t get it. In normal times, I’d expect that a slew of high-profile food poisoning incidents would produce bipartisan consensus in favor of a food safety bill. But then, I’d expect the same of a huge recession and an epic financial failure, and there was certainly no cooperation on fiscal stimulus or financial reform. So what happened? Is food safety genuinely different? Or did big ag fail to cough up enough dough this year during election season?