I got pretty burned out on deficit blogging after spending nearly a week writing about the Simpson-Bowles plan, which I continue to think is a poor starting point for a serious discussion of deficit reduction. So when the Domenici-Rivlin plan (henceforth D&R) came out, I only wrote one post 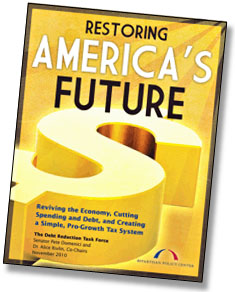 based on their Washington Post op-ed and then couldn’t work up the energy to say much more.

Which is too bad. To the extent that long-term deficit reduction is something we should try to address now, D&R is really a much better starting point. So here are some selected bullet points and comments about their plan:

That’s the nickel version of D&R. As these things go, it’s not bad, and unlike Simpson-Bowles it’s fairly balanced between spending cuts and tax increases. It also doesn’t assume a fundamentally conservative frame from the start by pretending we can limit federal spending to 21% of GDP forever. And the full plan includes a lot more serious detail than Simpson-Bowles, which should make it easier for tax experts to score.

For these reasons, of course, this means that it’s a nonstarter with conservatives. It really is pretty balanced, and because of that I expect it to be pretty roundly denounced by all the same righties who denounced liberals for not loving a fundamentally conservative deficit plan.