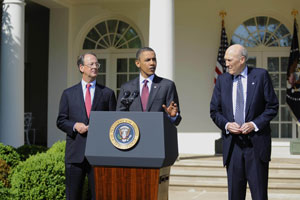 I’ve been trying to figure out whether I have anything to say about the “chairman’s mark” of the deficit commission report that was released today. In a sense, I don’t. This is not a piece of legislation, after all. Or a proposed piece of legislation. Or even a report from the deficit commission itself. It’s just a draft presentation put together by two guys. Do you know how many deficit reduction proposals are out there that have the backing of two guys? Thousands. Another one just doesn’t matter.

But the iron law of the news business is that if people are talking about it, then it matters. So this report matters, even though it’s really nothing more than the opinion of Alan Simpson and Erskine Bowles. So here’s what I think of it, all contained in one handy chart from the Congressional Budget Office:

Here’s what the chart means:

To put this more succinctly: any serious long-term deficit plan will spend about 1% of its time on the discretionary budget, 1% on Social Security, and 98% on healthcare. Any proposal that doesn’t maintain approximately that ratio shouldn’t be considered serious. The Simpson-Bowles plan, conversely, goes into loving detail about cuts to the discretionary budget and Social Security but turns suddenly vague and cramped when it gets to Medicare. That’s not serious.

There are other reasons the Simpson-Bowles plan isn’t serious. Capping revenue at 21% of GDP, for example. The plain fact is that over the next few decades Social Security will need a little more money and healthcare will need a lot more. That will be true even if we implement the greatest healthcare cost containment plan in the world. Pretending that we can nonetheless cap revenues at 2000 levels isn’t serious.

And their tax proposal? As part of a deficit reduction plan they want to cut taxes on the rich and make the federal tax system more regressive? That’s not serious either.