Matt Yglesias argues that, contrary to the notion that Democrats have some kind of chronic messaging problem, they haven’t really done too badly over the past few decades, winning the House, Senate, and popular vote for the presidency about half the time

What’s more, you need some kind of baseline against which to judge this. Over the 60 year lifespan of the Federal Republic of Germany, Social Democrats have run the government for 20 years. 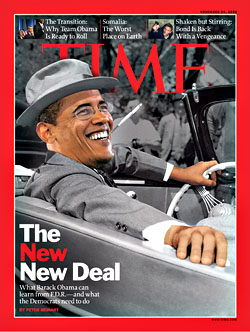 Over the 50 year life of the 5th Republic in France, the Socialist Party has held the presidency for 14 years. The basic idea of a center-right party is that it represents a coalition of the business establishment with the socio-cultural mainstream. That tends to give you a dominant position in politics.

True! But here’s another lens to look through, one that I’ve mentioned before. It’s liberal-centric rather than Democrat-centric.

Over the past century, American liberalism has mostly progressed in three very short, sharp spurts. The first was the Progressive Era, which saw the bulk of its legislative achievements in the decade between 1911 and 1919. These included the creation of the FTC, the Federal Reserve, the income tax, the Clayton Antitrust Act, the direct election of senators, voting rights for women, the breakup of Standard Oil, and the state-level reforms exemplified by Hiram Johnson in California.

Likewise, the bulk of the New Deal agenda was enacted in the six years between 1933 and 1938: the Glass-Steagall banking act, the Wagner Act, the WPA, Social Security, the Fair Labor Standards Act, deposit insurance, rural electrification, HOLC and the FHA, and a wide range of other smaller initiatives.

The sixties were similar: virtually all of the great legislative achievements we associate with that decade were enacted between 1964 and 1970: the Civil Rights Act, Medicare, the Voting Rights Act, passage of the Clean Air Act, Clean Water Act and the EPA, the creation of OSHA, the Truth in Lending Act, and a wide range of legislation associated with the war on poverty.

Obviously there are exceptions. Among others, the FDA was created in 1906, the GI Bill was passed in 1944, and the ADA was passed in 1990. And judicial progressivism has followed a schedule all its own. Still, the fact remains that the vast majority of significant liberal legislation in America has been enacted in three short spurts totalling about two decades out of the past century.

But the last one of these spurts ended 40 years ago, and the Obama Era, such as it was, lasted a mere 18 months. That’s despite the fact that Democrats had big majorities in both the House and Senate, George Bush had seemingly degraded the Republican brand almost beyond salvaging, and conservative policies had produced an epic financial collapse that should have provided a tremendous tailwind for substantial progressive reform. And yet: 18 months. That was it.

So yes: Democrats have done OK over the past few decades. And it’s fair to say that conservatism has made only modest strides during that period. Triumphalist right-wing rhetoric to the contrary, America obviously doesn’t have any burning desire to turn back the clock to the 1950s. But actual, substantial liberal progress? We haven’t seen so much of that, and after 18 months of modest achievements we’re obviously not going to get any more for quite a while.