Over at the mothership, Stephanie Mencimer takes a look at the latest release of the biennial American Values Survey and notes a disturbing finding: 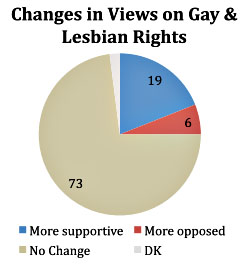 percent of Democrats and about half of independents. Republicans were closer to the tea party on that question, with 56 percent agreeing that discrimination against whites is a big problem.

This perception, of course, drives a tremendous amount of resentment against liberal elites who are viewed as responsible for this state of affairs. And mockable though it may be, mockery won’t make it go away. I’m not sure what will.

However, the AVS also has some good news. As the chart on the right shows, over the past five years 19% of Americans report that their views on gay and lesbian rights have grown more supportive. That’s a pretty massive sea change, all things considered, and something that the tea partiers have little chance of stopping. The full report is here.