Ezra Klein makes a good point today: contrary to much mythology, Medicare does control medical costs better than the private sector. Unfortunately, there’s a limit to how much cost control Medicare can accomplish in a world that’s still dominated by private insurance:

The problem is that Medicare can’t control costs too much better than private insurers or, as you see from the article above, doctors will simply abandon Medicare. In a world where there’s only Medicare and Medicare decides to control costs, doctors can either take the pay cut or stop being doctors. And as we see from other countries, lots of people want to be doctors, even if being a doctor doesn’t make you particularly 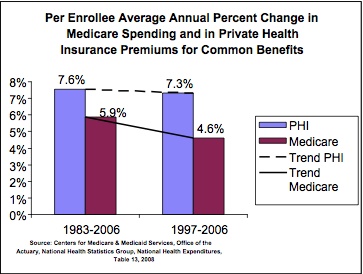 wealthy. But in a world where Medicare is just one of many payers and Medicare decides to control costs, doctors can simply stop taking Medicare patients and a lot of legislators will lose their jobs.

Keep this in mind when you hear congress critters bloviating about payment formulas and cost control mechanisms and how they’re never going to work. In fact, they might never work. But it’s not because there’s anything inherently impossible about them. It’s because the private sector does a terrible job of cost control, and there’s only just so much distance that Medicare can open up with its private competitors. As Uwe Reinhardt puts it: “The private sector is the inflationary component of health care, not Medicare or Medicaid. Medicare and Medicaid haven’t grown faster, even though they deal with the older population. It’s the private sector that doesn’t know how to control costs.”

In other healthcare analysis, Tyler Cowen offers seven worries about healthcare reform, one bright spot, and, of course, the observation that Republicans still don’t have any better ideas. His summary: “Overall, the policy is shaping up to be a mess more quickly than I had thought, though not through the mechanisms I had been expecting. It still seems to have too many jerry-rigged pressure points.” My take is that he’s overreacting to growing pains that will almost certainly work themselves out over time in far less apocalyptic fashion than critics think. Partly this will be via administrative rulemaking compromises and partly via congressional changes as it becomes clearer which pressure points are real problems and which ones aren’t. It’s still early days.