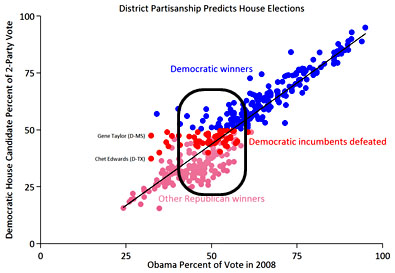 John Sides asks today for the single factor that best predicts which Democratic House incumbents lost their seats on Tuesday. It’s not ideology, he says, or how you voted on TARP, or any of those things:

The best predictor by far is none of those. It is simply how Democratic their district is. In our dataset, Eric McGhee and I measure that with the percentage of the vote that Obama received in 2008….In all 402 contested House elections, the 2008 presidential vote in that district would explain 83% of the variation in the Democratic House candidate’s vote share. Nothing else in our dataset comes close.

I’m a big fan of simple structural explanations like this, but I’ve got a big problem here. Sides’s chart is above, and it does indeed seem to show a very clean relationship. But a big reason for that is the large number of districts that are wildly partisan: above 60% is entirely Democratic and below 40% is (almost) entirely Republican.

This is no surprise, and also not very interesting. Of course massively partisan districts are highly likely to return partisan results. For one thing, most of them are hardly even contested. 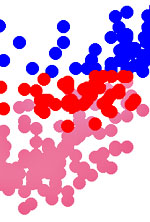 But what happens if you stay in the general vicinity of the middle? That’s the thick black box I added to to chart, and it shows only districts where Obama won 40-60% of the vote in 2008. I’ve enlarged it on the right. Just by eyeballing it, it looks like there’s still a relationship, but it’s a much weaker one. Note, for example, that the Republican pickups (bright red) are spread fairly evenly across the entire range. The overall regression line might be just as steep (I can’t say just by looking), but it’s definitely a lot muddier. It certainly explains way less than 83% of the variation in the 2010 vote.

A model that gets most of its power from its extremes doesn’t strike me as very explanatory. Everyone knows there’s no action there. What we want is a model that explains what happens in districts that are truly contested. Looking solely at the 2008 presidential votes doesn’t seem to get us very far there.