A prime reason why we have a budget deficit problem in this country is because Republicans almost universally believe in a nonsensical idea called starve the beast (STB). By this theory, the one and only thing they need to do to be fiscally 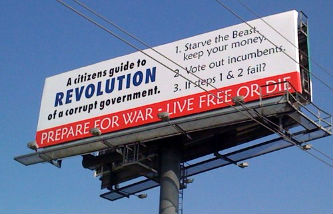 responsible is to cut taxes. They need not lift a finger to cut spending because it will magically come down, just as a child will reduce her spending if her allowance is cut — the precise analogy used by Ronald Reagan to defend this doctrine in a Feb. 5, 1981, address to the nation.

Bruce goes on to look at the empirical evidence — namely that spending went down after the Clinton tax increases and up after the Bush tax cuts — and concludes that STB is a “crackpot theory.” True! But what makes it even more crackpotty is that basic economic principles, of the kind that Republicans are endlessly lecturing the rest of us about, predict the same thing. If you raise taxes to pay for government programs, you’re essentially making them expensive. Conversely, if you cut taxes, you’re making government spending cheaper. So what does Econ 101 say happens when you reduce the price of something? Answer: demand for it goes up.

Cutting taxes makes government spending less expensive for taxpayers, which makes them want more of it. And politicians, obliging creatures that they are, are eager to give the people what they want. Result: lots of spending and lots of deficits.

If you want to reduce spending, the best way to do it is to raise taxes so that registered voters actually have to pay for the services they get. I don’t have a cute name for this theory, but it’s true nonetheless. Even for Republicans.