Beware of pundits today. Here is Politico on the fate of House Democrats who voted for the climate bill:

Nearly 30 (and counting) who cast ‘aye’ votes for Waxman-Markey were swept away on Tuesday’s anti-incumbent wave. The casualties ranged from 14-term Rep. Rick Boucher to freshman lawmakers like Betsy Markey, Mark Schauer and Tom Perriello.

But as Kate Sheppard tweets:

Looks like 25 of the 42 Dems who voted against the climate bill lost their seats today. #thatworkedoutwell

Italics mine. Likewise, a bunch of progressive Dems like Tom Periello lost their races, but as Glenn Greenwald points out:

Half of the Blue Dog incumbents were defeated, and by themselves accounted for close to half of the Democratic losses….For slothful pundits who want to derive sweeping meaning from individual races in order to blame the Left and claim that last night was a repudiation of liberalism, the far more rational conclusion — given the eradication of 50% of the Blue Dog caucus — is that the worst possible choice Democrats can make is to run as GOP-replicating corporatists devoted above all else to serving corporate interests in order to perpetuate their own power: what Washington calls “centrists” and “conservative Democrats.” That is who bore the bulk of the brunt of last night’s Democratic bloodbath — not liberals.

As it happens, I don’t buy Glenn’s analysis here. Parties win big majorities by nominating moderates who can win in swing districts. Inevitably, when the other party wins, they’re going to do it primarily by winning in those exact 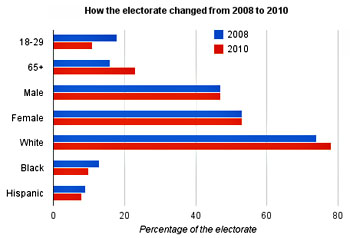 Still, his broad point is well taken. Liberals lost some seats, Blue Dogs lost some seats. Dems who voted for the climate bill lost some seats, Dems who voted against the climate bill lost some seats. In the House, Democrats just lost a lot of seats. So far, the most persuasive explanation I’ve seen that goes beyond structural issues is displayed in the chart on the right, from Ezra Klein. Basically, turnout among the young was way down and turnout among the old was way up. We’ll need to see raw turnout numbers compared to 2006 to really get the whole story here, but at first glance it looks like young people were discouraged and old people were fired up, and that made most of the difference. For non-lazy pundits, the next question is to ask why that happened. At a first guess, I’d say lack of Obamamania among the young and relentless Medicare demagoguery among the old. But for now, those are just guesses. The key is to find out which groups swung toward Republicans in greater numbers than the average swing, and the only way to do that is to look pretty carefully at the exit poll numbers. I’ll try to get around to that later today.