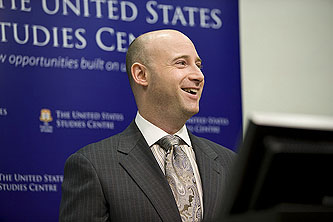 In this way, the “Don’t touch my junk” fiasco raises, yet again, what has become the central theme of Mr. Obama’s presidency: America’s faltering confidence in the ability of government to make things work. From stimulus spending and the health care law to the federal response to oil in the Gulf of Mexico, Mr. Obama has continually stumbled — blindly, it seems — into some version of the same debate, which is about whether we can trust federal bureaucracies to expand their reach without harming citizens or industry.

The conventional wisdom on display here is so lazy it probably wouldn’t cross the room for another beer if it were thirsty. Seriously: does Bai really think that America is suddenly in the midst of a brand new national debate about the reach of the federal bureaucracy?

It’s not. It’s in the midst of a great national debate about the reach of specific pieces of the federal bureaucracy that Fox News doesn’t like. Beyond that, it’s the same old dislike of bureaucrats telling us what to do that we’ve been engaged in since forever. There is exactly nothing that’s new here aside from the particular choice of topics that the Drudge/Rush/Fox axis happens to be focusing on.

Column writing is a peculiar business. Every week, Mother Jones asks me to write a semi-column that gets emailed out to subscribers on Friday morning and, lately, also gets published on the blog. It’s a column because it’s written in advance, so it’s not just a standard news-reaction blog post, but it’s a “semi” column because it’s still written in the basic blog format. Point being, it’s hard. You wouldn’t think it would be considering the amount of ordinary blog copy I churn out weekly, but it is. Every week I struggle to find something to write about.

But it never occurs to me to just say the hell with it and skylark away about the great American psyche, as if I have any idea what that is. I might mention some poll results now and again, and I might talk about how I think the public will react to specific things here and there. But grand notions of what it’s all about? I’m so keenly aware of my limited scope that I just wouldn’t ever do it.

But columnists do this routinely, despite the fact that their scope is probably just about as limited as mine when it comes to these grand ideas. So what is it that gives them the hubris to do it? Especially when they almost always choose to ignore the more mundane things that explain their grand ideas? It is a mystery to me. Maybe a latter day Studs Terkel needs to interview a whole bunch of columnists and find out just how their minds tick.