Just got this direct tweet from one of MoJo’s editors:

Hey Kevin, you want to tweet/blog link to Kate’s Cancun wrap up?

Seriously? The Cancun climate talks? You’re trying to tell me that I shouldn’t have completely tuned them out weeks ago? That something actually happened there? Seriously? OK then. Let’s see what Kate Sheppard has to say:

Broadly, the agreement accomplishes most of what observers hoped it would heading in two weeks ago: It records the commitments to cut greenhouse gas emissions that developed and developing countries 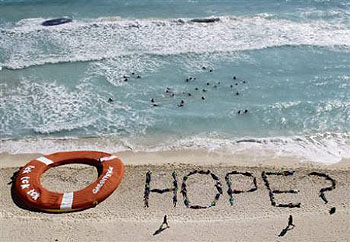 made in Copenhagen, establishes a framework for transparency, sets up a global climate fund with the goal of providing $100 billion in financing to developing countries by 2020, and establishes an initiative aimed at curbing deforestation.

Um, what? Actual progress? Granted, it was fairly modest progress, and apparently a decision to extend the binding Kyoto limits on greenhouse gas emissions was kicked down the road another year. As Sivan Kartha, a senior scientist with the Stockholm Environment Institute in Boston, says, it’s not clear whether that one-year delay on a decision will serve as “a lifeline or a noose” for Kyoto.

Still, read the whole thing. I’ve been in such a deep funk over climate change for the past six months that I’ve barely paid any attention to it at all. I have a feeling I’m not the only one. But Kate quotes EU commissioner for climate action Connie Hedegaard, who says last year’s failure at Copenhagen might have opened a few eyes. “The major difference is that people this year realized if we didn’t get a result here the process risked dying,” she said. “Basically it was the political will that changed.”