After reading a new paper on income inequality, Tyler Cowen says this is a “scream it from the rooftops” result:

….we find that a one percent increase in the net of tax share is associated with an 0.7 percent reduction in incomes earned by people in the top 0.1 percent of the income distribution, which would imply that if we were to raise top marginal tax rates further on these taxpayers, the increase in deadweight loss would be substantially larger than the increase in revenue raised [emphasis added]. However, we find essentially no evidence at all of any responsiveness of people below the top 0.1 percent…

The paper is here. I read it over the weekend, and since a lot of people probably saw Tyler’s excerpt I thought it would be worthwhile to point out a couple of things:

I’d say a bit more. Even if you assume that the original number is correct, you have to ask yourself what it means. For someone earning a million dollars a year or more, why would their income go down because their tax rates went up? Because they decided to work less? That’s highly unlikely, and the kind of people who earn money at this level — primarily CEOs, executives, and financial industry professionals — aren’t paid based on how many hours they work anyway. Would Wall Street traders make fewer trades? That also seems unlikely, but even if they did it just means that someone else would do it. (Though who knows? Less trading might actually be a net benefit to society, not a deadweight loss.) Would they quit their jobs? Again unlikely, but in any case this 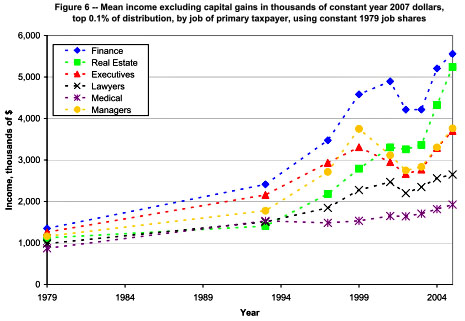 would have no effect on society at large. Would they get lazy and drive their companies into a ditch, therefore lowering their bonuses? That hardly seems likely either.

The problem here is twofold. First, the calculation of elasticity is obviously very sensitive to the parameters of the model you use. Second, it’s very difficult to conceive of an actual mechanism in which higher taxes on top earners translates into lower work performance and therefore deadweight loss to society. My guess is that super high earners respond to tax increases mainly via accounting strategies, not work effort, and in any case, any reduction in their earnings simply ends up going somewhere else anyway. In fact, if you take the original model in this paper seriously, an increase in high marginal tax rates reduces the earnings of the 99.9th percentile but increases the earnings of the 99.0-99.9th percentile. In other words, the total earnings of the top 1% probably go up on net.

But if you still want a “scream it from the rooftops” result from this paper, try this one instead:

According to the authors, skill-biased technical change and globalization are unlikely candidates too, and the superstar effect is too small to have a significant impact. It has to be something else. Something that’s driving enormous changes not just at the top, but at the very tippy top. The financialization of the U.S. economy, along with changes in norms of corporate governance, seem like the best guesses to me. Anybody got a better one?