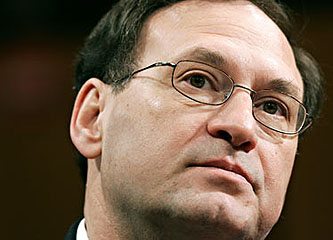 outrageous, but still, a wave of lawsuits against prosecutors from everyone ever jailed wrongly probably isn’t something we need.

But certainly there are limits. How about this, for example?

Prosecutors in the New Orleans district attorney’s office had intentionally hidden a blood test that would have unraveled the criminal case against [John] Thompson. By a stroke of luck, a young investigator scouring the crime lab files found a microfiche copy of it. Thompson’s blood type did not match. That single piece of evidence led eventually to Thompson being declared innocent of murder.

This came after 14 years on death row and one month before Thompson was scheduled to be executed. A New Orleans jury awarded him $14 million when he sued, but the case was appealed to the Supreme Court. So how did things go?

But oral arguments at the Supreme Court in the fall suggest he may not see a nickel of it. The high court has taken a dim view of suing prosecutors, and in Thompson’s case, the court’s conservatives led by Justice Samuel A. Alito Jr. questioned whether the district attorney’s office should be held responsible for the misdeeds of a few prosecutors.

This isn’t even fancy DNA evidence. Prosecutors deliberately withheld evidence that Thompson had the wrong blood type and blithely sent him to death row. And yet Sam Alito is disturbed at the idea that the district attorney’s office should be held responsible for the misdeeds of a few prosecutors. Jesus Christ.