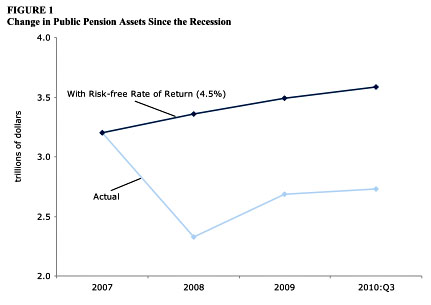 Via Paul Krugman, Dean Baker has a paper out today that explains why state pension funds are in trouble: It’s the recession, stupid. The entire shortfall can be attributed to stock market losses and underfunding in just the past four years:

…. In the period since the beginning of the recession, annual payments into state and local pension funds have averaged $6.9 billion less than withdrawals. By contrast, in the three years prior to the downturn, payments averaged $18.4 billion more than withdrawals. If state and local governments had continued to contribute to their pensions at the same rate as they had in the prior three years, then the total assets of these funds would be $77 billion higher than was reported at the end of the third quarter of 2010. Adding this to the $857 billion figure above results in an additional $934 billion in pension funds, a figure far higher than most estimates of the size of state and local government shortfalls.

Dean calculates that if pension funds continue to invest in a basket of assets that includes equities, and economic performance remains at historical levels, most states have a pension shortfall of less than 0.2% of income. If this is right, then either modest changes in state contributions or modest changes in employee contributions (or a combination of both) are all that’s necessary to eliminate the pension shortfall entirely. It’s just not as big a problem as critics are suggesting.