What to think about John Boehner? On Meet the Press yesterday, David Gregory asked him about birthers who insist that Barack Obama wasn’t born in the U.S.:

“As speaker of the House, as a leader, do you not think it’s your responsibility to speak out against that kind of ignorance?” asked the host, David Gregory. “It’s not my job to tell the American people what to think,” Boehner said. 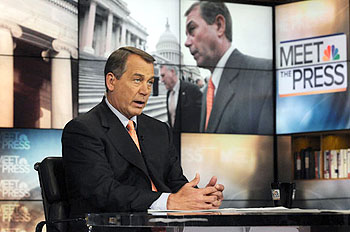 “The American people have the right to think what they want to think.”

Crikey. This is tea party pandering of the worst kind. But then Gregory asked him about Egypt:

House Speaker John A. Boehner said Sunday he thought the Obama administration handled “a very difficult situation” in Egypt about as well as possible, undercutting potential Republican presidential candidates who have charged that President Obama botched the U.S. response to a popular revolt against a key ally….The situation “surprised everyone,” he said.

I have to say, that’s pretty refreshing considering the mountains of transparently absurd criticism that Republicans have been heaping on Obama at CPAC and elsewhere. The fact is that Obama steered a middle course on Egypt that was pretty close to the best he could have done, and what’s more, was probably nearly identical to the course George Bush would have followed if he’d been in office.

The hypocrisy and opportunism from conservative critics of Obama’s handling of Egypt have been pretty far off the charts even by normal political standards. Obama’s response was cautious but basically correct, he worked behind the scenes reasonably effectively considering the modest amount of leverage we had, and he largely avoided giving anyone an excuse to pretend that the protesters were just American stooges. There’s stuff to criticize there if you’re minded to, but it’s stuff on the edges. There’s just a limited amount that the United States can do in these circumstances and everyone is well aware of it. But you’d hardly know it from the apocalyptic rhetoric coming from Republicans over the past few days.

So good for Boehner for stating the obvious. Now about that birther stuff…..