About 10% of all babies in the United States are born prematurely, a problem that costs $26 billion a year due to the additional health problems that are common among premature babies. A drug called 17P is one way of delaying premature births: 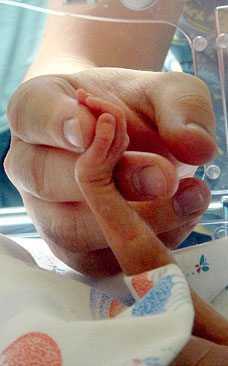 Since 2003, the American Congress of Obstetricians and Gynecologists has recommended that doctors offer the progesterone shots to high-risk women. But because there has not been a commercial product available, women have obtained the drug from so-called compounding pharmacies, which make it to order. The pharmacies have typically charged about $10 to $20 per shot for the drug, which is given weekly.

So a full treatment of 20 shots costs about $300. Until now, that is. In February the FDA granted approval of a branded version of 17P to Hologic Inc. under the agency’s “orphan status” rule:

The approval rested largely on a 2003 study financed by the National Institutes of Health, which showed that 17P helped deter pre-term births, and also the fact that doctors had prescribed the drug “off-label” — meaning for a different use than approved by the FDA — to expectant mothers for years.

Note that the drug itself had been around since the 1950s and its approval for use in premature births was based largely on testing performed in 2003 by a publicly funded agency, the NIH. Nonetheless, Hologic was given exclusive marketing rights, which it sold for $200 million to K-V Pharmaceutical, which calls the branded version Makena. As a result:

KV Pharmaceutical Co. on Monday will start selling a newly FDA-approved pre-natal drug — at $1,500 per injection, more than 100 times its current cost….Although 17P has been promoted as a cost saver, KV’s pricing for Makena could actually increase the costs associated with pre-term births and reduce women’s access to the drug. A full treatment of between 15 and 20 shots would typically run $25,000.

“Wow. That’s a lot,” said Arleasha Hays, a spokeswoman for the Missouri Department of Social Services, which oversees the state Medicaid program and would have to approve Makena’s purchase. “That is very surprising.”

The FDA required Hologic to perform some additional studies before Makena was approved, including a follow-up post-approval study that will run through 2018. Maybe this is worth $200 million. I don’t know. But I wonder if Medicaid will pony up $25,000 for this shiny new version of 17P? I wonder how many low-income mothers will no longer have access to it? I wonder if our pharmaceutical approval system is completely screwed up?