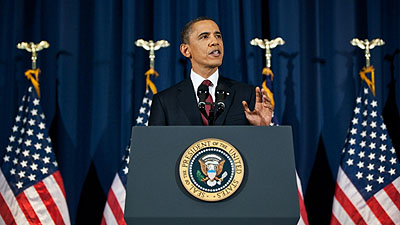 I’ve been under the weather for the past few days, so I missed Obama’s big Libya speech yesterday. I meant to watch it, but then I fell asleep on the couch and by the time I woke up it was over. But I’ve since read the text of the speech, and I basically agree with Fred Kaplan: it was “about as shrewd and sensible as any such address could have been.” A little messy, perhaps, but we live in a messy world:

Obama’s main point was this: When, as he put it, “our interests and values are at stake,” and when taking military action a) carries few risks, b) costs little, and c) may reap huge benefits, both political and humanitarian, then such action is worth taking even if the interests involved aren’t quite vital.

This formulation is unsatisfying, both to the Realists (who shy from using force except in pursuit of vital interests and, even then, only when the outcome is fairly certain and preponderant force is mustered) and to the neoconservatives (who leap to use force anywhere and everywhere in the cause of universal moral values). But it reflects a sense of realism with a small r.

Clive Crook seems to find this likewise a bit unsatisfying, but suggests that, like democracy, Obama’s approach produced the worst possible policy except for all the others:

If you doubt it, don’t just list the policy’s all too obvious dangers: test it against the alternatives — something I have not seen Obama’s critics do. One option would have been to do nothing. In other words, abstain with China and Russia on the UNSC resolution. What a splendid message to the world that would have sent. Or maybe vote for the resolution, then commit no resources to enforcing it–the usual European approach to global leadership. Thankfully, the US is better than that. Alternatively, go all in, make regime change the goal, and target Gaddafi–but now without international backing. That would have been a heavier burden and an even bigger gamble. The course of action Obama chose is risky, to be sure, but when you think them through the alternatives look worse.

In the end, Obama will be judged on whether his approach works. If U.S. involvement really stays limited; if Qaddafi finds himself out of a job within a few weeks; and if the aftermath of the war isn’t too disastrous, then Obama will be vindicated, congressional approval or not. If any of these things doesn’t happen — and I’d pay particular attention to the last of them — he’ll be in trouble. As with all things, success justifies nearly anything.