I’ll get back to highlighting a few of the results from the GAO’s report on streamlining government later today, but first I want to highlight this nugget from Reuters columnist James Pethokoukis:

OK, so the U.S. government’s auditor has found duplication and overlap that may be wasting $100 billion or more a year, according to the Republican senator who commissioned the study. How can anyone argue for higher taxes as long as Washington is so inefficient?….For instance, the auditor found 82 separate federal programs to improve teacher quality ($4 billion a year), and 20 distinct programs to deal with homelessness ($2.9 billion a year).

Let’s settle down a bit here. First of all, note that the GAO didn’t say its recommendations could save $100 billion per year. That’s what Republican senator James Inhofe says, and it’s basically just a number he pulled out of his hat to 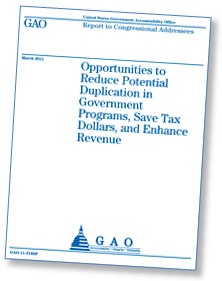 make the government look as wasteful as possible. Pethokoukis then goes along with the gag by kinda sorta implying that the GAO found $4 billion a year of waste in teacher programs and $2.9 billion in homelessness programs.

They didn’t. That’s just the total amount of money spent by these programs, and GAO thinks the administrative portion of this might be reduced if those programs were better coordinated. And maybe so. But most of the money in those programs isn’t spent on administration, it’s spent on improving teacher quality and dealing with homelessness. Administrative expenses probably amount to no more than 10-20% of their budgets, and streamlining administration would probably save 10-20% of that. That’s worth doing, but even in the best case it would most likely save a hundred million or so, not several billion. We’re not going to come within a light year of closing the budget deficit by streamlining duplicative programs, and no one who suggests otherwise should be taken seriously.

That brings up two other points that are worth keeping in mind. First, keep your eye out for attempts to turn the GAO report into a fight not over waste, but over the actual programs themselves. Perhaps federal homelessness programs really could be run better, but my guess is that what Coburn and a lot of his allies really want is simply to slash funding for homelessness programs. Exaggerated accusations of waste and duplication are a convenient cudgel in that fight, but that’s all they are.

Second, it’s worth keeping in mind that sometimes it’s useful to have multiple small programs instead of one big coordinated program because small programs can experiment with different approaches to see what works best instead of being stifled by a single big bureaucracy. It’s also the case that sometimes it’s actually more efficient to have multiple programs. A homelessness program aimed at helping municipal governments is probably best run out of an agency that already deals with municipal governments and doesn’t have to reinvent the wheel just to figure out who the players are and how to do outreach. Ditto for programs aimed at church groups, nonprofits, law enforcement, etc.

Streamlining is a worthwhile goal, but it’s wise not to get too caught up in box-drawing exercises. They’re the favorite solution of management consultants and CEOs with no better ideas at hand, but it’s rare that reporting structure is really the key problem in an organization. If you have 20 different programs that provide assistance to 20 different kinds of clients, it’s simply not obvious whether you should organize things by program type or by client type. On a more general level, sometimes centralization is good, sometimes decentralization is good, and sometimes it’s good just to shake things up. But the real problems usually lie elsewhere.