The “skin in the game” theory of healthcare says that if people have to pay for medical services out of their own pocket, they’ll be more careful about what they do and don’t need, and this will drive down healthcare costs. A Rand study several decades ago suggested there was something to this, but there hasn’t been much rigorous research beyond that. It’s just too expensive to do it properly.

But another way to look at this question, if a multi-million dollar study is beyond your means, is with international comparisons. Some countries require more out-of-pocket copays than others, and if the skin-in-the-game theory is right, countries with higher average copays ought to have lower overall healthcare costs. Aaron Carroll took a look at this a few days ago, but he began by comparing raw out-of-pocket costs, which isn’t really fair since it doesn’t account for different living standards. A thousand dollars for an American might be less burdensome than $700 to a Spaniard, after all.

So how about looking at out-of-pocket spending as a share of GDP? That’s not really right either. We want to know if out-of-pocket costs are an incentive to consume medical care more carefully, and for that we need to look at actual dollars, not percentages of GDP, since it’s actual dollars that motivate people.

Our best bet, then, would be to look at actual dollar out-of-pocket costs as a percent of average income. So I emailed Aaron and asked him if he’d modify his latest chart to show this. And since we’re all part of the same great healthcare chartmaking conspiracy, he womped up a nice bar chart right away. Here it is for most of the world’s rich countries: 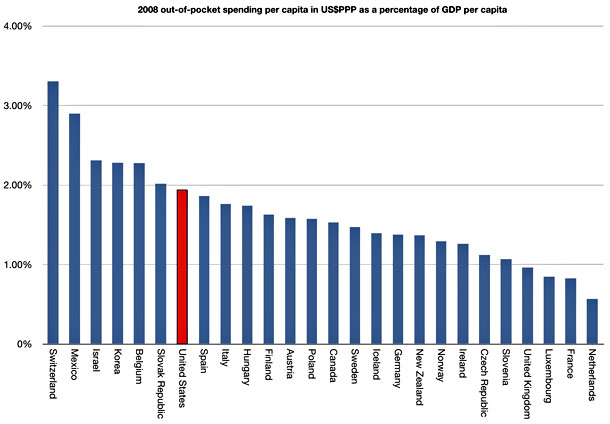 Different countries have different cultures and different ways of allocating costs, so a simple chart like this will never be definitive. Still, the only real evidence that high copays produce lower healthcare expenditures is that one Rand study, and it’s getting kind of long in the tooth. (It was also a short-term study, had fairly low maximums, and investigated the healthcare world of the 70s, which is quite different from today’s.) Done properly, making people pay more for healthcare might be a good idea, but the international evidence doesn’t do much to support the notion that it would have a huge impact.