Via Felix Salmon, this chart shows the amount of money flowing into commodity markets following the Great Collapse of 2008. At a minimum, there are two things going on here. First, the Fed’s quantitative easing program made lots of cheap money 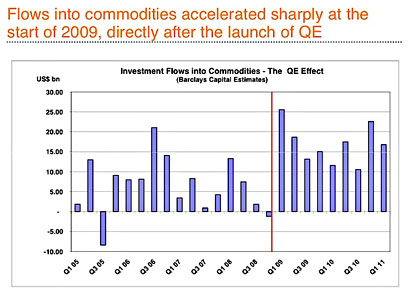 available to Wall Street. Second, with the housing market in tatters and the real economy in deep recession, there were a limited number of places to invest that money. However, emerging markets were still hot, and that was likely to drive an increase in demand for commodities. So with commodities looking set for a rise and no other investment opportunities presenting themselves, Wall Street piled on. Anything worth doing is worth overdoing, after all, and modern finance seems almost purpose-built to overreact to changes in world markets.

So will this be as disastrous as the housing bubble? Probably not, because, as Felix says, commodity investments probably aren’t as highly leveraged as subprime investment vehicles became:

The impossible-to-answer question is how much of that investment is leveraged, in one way or another. The lesson of the commodities crash is ultimately a hopeful one: it didn’t set off any panic, and Main Street didn’t suffer much in the way of visible losses. And I don’t think that Wall Street has a leveraged long position in commodities in the same way that it had a leveraged long position in subprime in 2008. So the systemic risks posed by any commodities bubble are probably small.

Still, this is clearly now a speculators’ market, and that’s bad news for commodity-reliant industries. They’re up against finance types, now, which is never a pleasant position to be in. The crash will come — but only after real-world end-users have hedged their needs at very high prices.

The aspect of this that bothers me the most is the same one that’s been in the back of my mind for quite a while: this kind of pile-on, leveraged or not, is an indication that there are too few good investment opportunities in the world of real goods and services. There have been indications that this is the case for years now, and in the long run that strikes me as more dangerous than any specific bubbles.