Here’s an intriguing chart from Vanessa Williamson, Theda Skocpol and John Coggin, via the Monkey Cage. It shows coverage of the tax day rallies put on by the tea party movement in 2009 on both CNN and Fox. The nickel 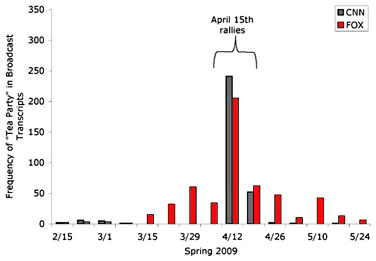 version is that CNN gave the rallies a lot of coverage on the day of the events plus a little bit of followup the next day. In other words, they treated the rallies as a news event. But Fox’s approach was a wee bit different:

In telling contrast, Fox News shows significant and growing coverage in the lead-up to the April rallies. … FoxNews has explicitly mobilized its viewers by connecting the Tea Party to their own brand identity. … Rather than serving a journalistic, or even a propagandistic function, Fox News in effect acts as a “national social movement organization,” as described by sociologist Debra Minkoff in studies of liberal identity movements. For a scattered set of people who might feel isolated or marginalized (like gays and lesbians, in Minkoff’s original example), a resourceful national organization can help to provide “an infrastructure for collective action” by promoting “the diffusion of collective identities” and fostering “at least a minimal degree of solidarity and integration.”

Fox News and its audience are all one big happy family, and Fox views its job as rallying its base, not as simply providing them with news. I don’t think anyone will be especially surprised to hear that, but this is an interesting lens for understanding the difference between how a news organization covers the news and how an activist organization like Fox covers the news.