Goodwin Liu is a smart, accomplished, liberal constitutional lawyer who’s been nominated for a seat on the 9th Circuit Court. Lots of conservatives support him, but his confirmation looks increasingly unlikely regardless. Yesterday Adam Serwer tried to figure out why Republicans are so hellbent on blocking his nomination:

The real reason Republicans are trying to block Liu is this: Because of his youth (he’s 39), intelligence and outlook, he’d be a tempting choice 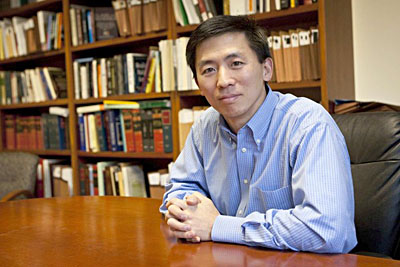 the next time a spot opens up on the Supreme Court.

But I think Adam’s take today is much closer to the truth:

Senate Republicans appear poised to filibuster the nomination of Goodwin Liu to the 9th Circuit Court of appeals, and they’ve settled on their reason why: Liu was awful mean to Justice Samuel Alito. As the Legal Times reports, Senators Lindsey Graham, John McCain, and Johnny Isakson all cited Liu’s testimony against Alito’s nomination as a reason for blocking him.

Yep. Liu is plenty liberal, which gives Republicans cover for voting against him. But honestly, it’s mostly pique that’s driving this. Here’s conservative Jonathan Adler writing about Liu over a year ago:

I believe Senate Republicans are likely to oppose Prof. Liu for multiple reasons. First, Prof. Liu Chairs the Board of Directors the American Constitution Society for Law and Policy. This is not the sort of thing that should be disqualifying for a federal judgship, to be sure. Yet Senate Democrats firecely opposed, and ultimately blocked, confirmation of Peter Keisler to the U.S. Court of Appeals for the D.C. Circuit, largely because he was a co-founder of the Federalist Society for Law and Public Policy Studies (where he is also now Chairman of the Board).

Second, Prof. Liu was an outspoken critic of President Bush’s nomination of Samuel Alito to the Supreme Court. He co-authored an ACS report critical of Judge Alito’s record on death penalty cases and, more importantly, testified against then-Judge Alito’s confirmation to the Supreme Court. In his testimony, Prof. Liu argued that Senators should consider a nominee’s “judicial philosophy” and suggested that Judge Alito should fail such a test. According to Prof. Liu, then-Judge Alito was “at the margin, not the mainstream,” and that the America envisioned by his record on the bench “is not the America we know. Nor is it the America we aspire to be.” I suspect Senate Republicans will remember this testimony when considering Prof. Liu’s nomination.

Judicial nominations have spun out of control over the past couple of decades, and there’s blame to go around on this. Conservatives have never forgiven liberals for the Bork/Ginsburg/Thomas trifecta of the late 80s and early 90s. Liberals continue to seethe over Orrin Hatch’s transparent abuse of the blue slip rules in the aughts. Both sides are convinced that the other is dedicated to nominating extremists to the bench.

I don’t know what the answer is. As a matter of policy, I believe that presidential nominations should get considerable deference. Conservative presidents are going to nominate conservative judges and liberal presidents are going to nominate liberal judges, and both sides should accept that. But there’s always a but, and in this case it’s whether there’s genuinely a line that separates the merely ideological from the recklessly extreme. There probably is, but I’ve never heard anyone explicate it in an actually usable way. Maybe some nice bipartisan commission ought to take a crack at it.