The American trend toward forced arbitration is bad for consumers. Basically, most commercial transactions you go through today — buying a house, buying a car, seeing a doctor, etc. — include contracts that demand resolution of all disputes not in a court of law, but via arbitration. And, unsurprisingly, the arbitrator is chosen by the business person, not the consumer. You can, of course, refuse to sign a contract with anyone who insists on arbitration, but there are whole industries where this has become so pervasive that you hardly 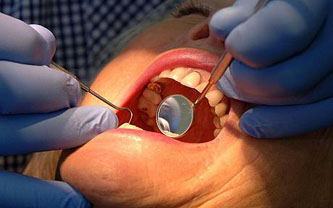 have a choice. If you refuse to sign, you just don’t get your teeth cleaned. See Stephanie Mencimer for chapter and verse on this.

Now, via Matt Yglesias, I see that things are going even further. Here’s Tim Lee writing at Ars Technica:

When I walked into the offices of Dr. Ken Cirka, I was looking for cleaner teeth, not material for an Ars Technica story. I needed a new dentist, and Yelp says Dr. Cirka is one of the best in the Philadelphia area. The receptionist handed me a clipboard with forms to fill out. After the usual patient information form, there was a “mutual privacy agreement” that asked me to transfer ownership of any public commentary I might write in the future to Dr. Cirka. Surprised and a little outraged by this, I got into a lengthy discussion with Dr. Cirka’s office manager that ended in me refusing to sign and her showing me the door.

….The growing use of censorious copyright assignments recently caught the attention of law professors Jason Schultz and Eric Goldman, who created a site called Doctored Reviews to educate doctors and patients about the phenomenon.

When Ars asked Schultz about medical professionals who ask their patients to sign these agreements, he was scathing. “It’s completely unethical for doctors to force their patients to sign away their rights in order to get medical care,” he said. He pointed out that patients seeking treatment can be particularly vulnerable to coercion. Patients might be in acute pain or facing a life-threatening illness. Such patients are in no position to haggle over the minutia of copyright law.

We bought a new car this weekend, and the sales contract included the usual arbitration clause. We signed it. What choice did we have? But if the car is a lemon or the dealership screws us over, at least I can write about it without worrying over whether I’m violating some kind of gag clause. The experts Lee interviewed said these clauses are probably unenforceable, but how many ordinary citizens are willing to bet on that if they get a threatening letter on legal letterhead threatening to ruin them? Not too many, probably.

As near as I can tell, businesses in the United States increasingly think that basic constitutional rights are mere annoyances to be swatted away. Before long they’re going to demand the right to search your house without your permission anytime they think you’ve done something they don’t like. And why not? The United States government increasingly seems to view the constitution the same way.