David Brooks says that tea partiers are angry at the “unholy alliance between business and government that is polluting the country.” I think that’s crazy: tea partiers don’t seem to have any problem with big business at all. But Tim Carney thinks I’m nuts:

Does Drum think that Tea Partiers prefer a complex, special-interest-rewarding, behavior-modifying tax code to a flat and simple one? Does Drum think that Tea Partiers cheer for regulations like the Consumer Product Safety Improvement Act, the tobacco regulation bill, and the employer mandate in health-care that Big Businesses support in order to crush smaller competitors?

Just for the sake of discussion, let’s grant that these bills favor big companies over small ones. It’s more complicated than that, but leave that aside. Contra Carney, the question isn’t whether tea partiers cheer for bills like this (I doubt it), it’s whether the main source of their anger is that these bills favor big business. There’s simply no evidence of that at all, as near as I can tell. I can’t think of a single hot button tea party issue that’s related to the power of big business or to the coziness of corporate lobbyists with our nation’s lawmakers. It’s simply not something that ever comes up in conversations with tea partiers. It’s all about Obama and socialism and Obama and government spending and Obama and deficits and Obama.

Needless to say, it’s hard to prove this one way or the other. Who knows what’s really in the hearts of tea partiers? But for what it’s worth, here’s some evidence from a much discussed New York Times poll of tea partiers from last last year. They asked an open-ended question: “What are you most angry about?” Not only is there nothing whatsoever there about big business, but a mere 18 months after an economic collapse that was widely blamed on some of the biggest businesses around, virtually no one said they were most angry at Wall Street, big banks, or the bank bailout. It wasn’t even on their radar.

Maybe tea partiers are angrier about government coziness with big business than I think. But I sure don’t see it in either their rhetoric, their funders, their legislative priorities, or the polling evidence. 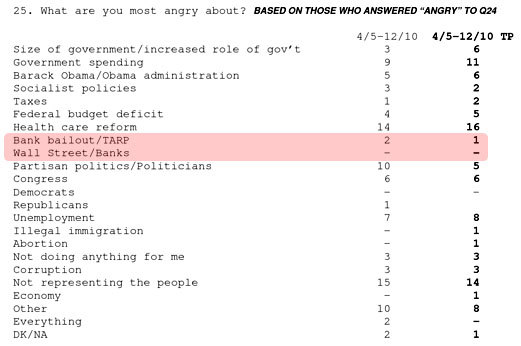