Is the EPA a job-killing machine? On the off chance that empirical evidence still matters to anyone, Dave Roberts summarizes a bit of recent research into this question from the Economic Policy Institute. First up, Isaac Shapiro takes a look at the costs and benefit of several new EPA rules:

The dollar value of the benefits of the major rules finalized or proposed by the EPA so far during the Obama administration exceeds the rules’ costs by an exceptionally wide margin. Health benefits in terms of lives saved and illnesses avoided will be enormous. Expressed in 2010 dollars:

OK, fine: the rules will save lives and improve our health. But at what cost in the tidal wave of jobs lost just to get a bit of mercury and soot out of the air? EPI’s Josh Bivens runs the numbers for one of EPA’s biggest initiatives, the “air toxics” rule. Here’s the final tabulation: 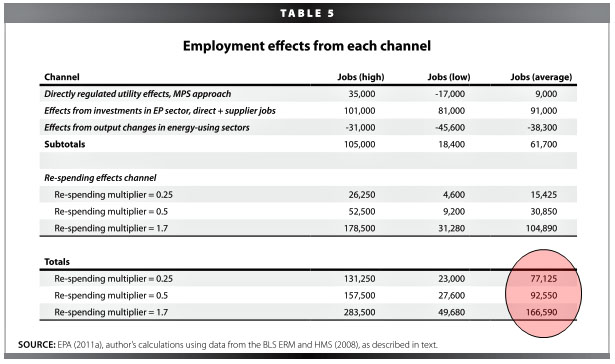 If you want to, you can still object to these rules. Maybe you can argue that they’re distortionary in some way, or that there are cheaper ways of getting the same results. Maybe. But even if the rules aren’t perfect, their benefits far exceed their costs and they actually produce additional jobs for the economy. Dave sums things up:

Conservatives are hiding behind abstractions — job-killing big-government blah-blah — but don’t be fooled. They are not protecting “the economy” or “jobs.” They are protecting a specific set of polluting industries, at the expense of the public interest. Put that horsesh*t in any ideological serving dish you want. It still stinks.