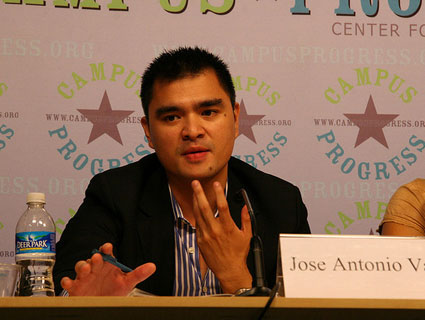 Kevin is on vacation, so Andy Kroll and I are filling in for a few days.

In April 2008, Jose Antonio Vargas, then a reporter at the Washington Post, shared a Pulitzer prize for the paper’s coverage of the Virginia Tech shootings. Last September, he published a 6,200-word profile of Facebook’s Mark Zuckerberg in the New Yorker—the result of what he later called his “dream assignment.” By any yardstick of traditional journalism, Vargas had made it.

This morning, the New York Times published Vargas’ confession: he’s an undocumented immigrant, and he’s apparently committed a number of fraud-related crimes in order to obtain the documents he needed to stay in the country and keep working. It’s hard to summarize Vargas’ story—he didn’t even know he was undocumented until, at 16, he applied for a learner’s permit—so you should read the whole thing.

I’m sympathetic to Matt Yglesias’ view that we should empathize with all people who come to the United States in search of a better life, even if, unlike Vargas, they do so knowing that what they’re doing is illegal. But I’ve also worked with foreign-born journalists who’ve paid thousands or tens of thousands of dollars and waded through miles of red tape and seemingly senseless regulations—including, sometimes, returning to their home countries for a period—in order to work in this country.* (This applies outside of journalism, too, of course.) I wonder how they’re feeling about Jose Antonio Vargas this morning.

*UPDATE: As discussed in the comments, these senseless hurdles are a central part of the problem.