Editor’s note: This is the third part of a three-part series of dispatches from Jonathan Dworkin, an infectious diseases fellow at Brown who spent several months in Iraqi Kurdistan in 2006 and returned for a followup visit in May. Read Part 1 here and Part 2 here.

In Sulaimania’s directorate of health we play a game with paperwork. My friend drafts a letter in Kurdish. The letter receives an “opening” stamp by a secretary, and then the director signs it. Next we move to another office, where the letter is stamped by the legal manager. Following this, we must “bake the papers,” as my friend describes it. This involves having a separate secretary type and print the document. The new printed document is signed sequentially by secretaries in three different offices. We next meet a man who is dressed in traditional Kurdish trousers and a broad belt. Ceremoniously he operates the photocopy machine, keeping several copies and handing us two. Feeling bold, we skip the next step, which is an additional stamp from the legal manager. No one notices, and the director’s secretary provides the “closing” stamp. Then the director signs the final copy. Now it is official: I am an American, my name is Jonathan, and I am a doctor.

Decades after the American invasion of Iraq, elaborate paperwork completed in Kurdish, Arabic, and English may be the longest lasting consequence of the war. But the comedy of the health directorate has a darker side. My paperwork is the simplest operation, needed only to confirm reality. Doctors with problems involving their salary or faculty appointments face years of hostile inertia. And the ministries are, of course, politicized. A ministry official 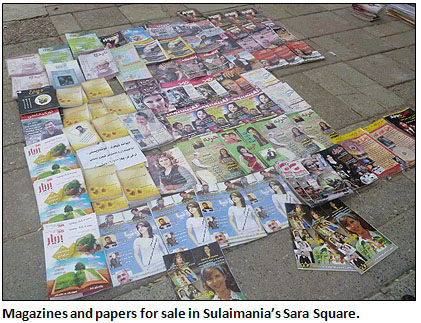 informed one friend that he could not work in a Sulaimania hospital because of his support for the opposition in the last election. The man told him matter-of-factly, without any apparent sense of embarrassment.

It’s important to keep in mind that the Health Ministry is one of the least politicized branches of the Kurdish government. Imagine how the Ministry of Oil functions. Now add to this another peculiarity of Kurdistan, which is that the security forces are still controlled by political parties. In 2006 when I travelled from Erbil to Sulaimania I crossed from one political fiefdom to another. The army checkpoints along the road each carried the flags of their respective parties. Now the checkpoints fly the Kurdish flag, but the change is superficial. The parties remain armed, and there is no professional army independent of the parties. This became apparent in the recent demonstrations, when the two ruling parties, having banded together in an Orwellian merger, used their soldiers to break the opposition.

Since the demonstrations ended, the same parties have used their internal security forces to intimidate protest organizers. As I’m writing this, today’s news features images of a rally organizer who was kidnapped last night by masked men in cars with tinted windows. He was beaten with rifle butts and stabbed with knives. The man was lucky to survive, but the message to the opposition couldn’t be clearer: Persist and no one can protect you. It is through these actions that Kurdish security is completing its transformation from a force intended to protect Kurds to one intended for internal suppression.

It is difficult for Americans to understand the depth of this system of coercion. The Kurds simply refer to it as “corruption,” but the word in English understates the problem. When Americans think of corruption, they often think of bribes, which rarely occur here. In Kurdistan, however, party politics permeate every institution in the country, from police headquarters to the dean’s office. A person is forced constantly to choose between their ambition and their independence. Building a promising career means making peace with this system. It means neglecting your own internal sense of justice.

Despite this, in three weeks in Sulaimania I have not met five people willing to defend the government in public. The city has undergone a sea change since 2006 and is simmering in opposition politics. Not everyone agrees on what the future should look like. Many of the people I speak with are secular, but some are observant Muslims. All agree on nonviolence and a constitutional system of some kind, and all point to the ministries and security forces as the prime examples of why change is necessary.

In 2006 I expressed the hope that America would partner with Iraqi Kurds to build stronger and more independent civic institutions. In particular I hoped that the universities could break free of the ministries and allow a space to open for political debate and scientific research. There is no evidence this has happened. Meanwhile American policy has remained fixed on the capital. In the Kurdish government we have a useful counterweight against Iran-backed politicians in Baghdad. Barely a word was uttered by anyone in the White House or State Department during the crackdown here, and in Obama’s speech on Middle East reform, he did not mention the words “Kurd” or “Kurdistan.”

I’d like to conclude by going back to my last dispatch. The closer you look at the murder of Sardasht Osman, the more monstrous it becomes. That should have been the end of business as usual between our governments. For most people here America’s silence during the political repression — particularly when the army entered Sulaimania—has tainted our positive image. I can imagine a future in which anti-Americanism takes root as a popular expression of opposition, or even in which radical Islam finds an audience open to its conspiracies and grievances. This is why it has never been intelligent to focus exclusively on politics in Baghdad and overlook what’s happening in Sulaimania and Erbil. Fortunately, most Kurds understand that they must solve their own problems, including the abuses of their government. But American support for that government needs to become a lot more conditional, and soon, or Kurds will conclude for themselves that this is a friendship they’d rather do without.