The Republican debate dispelled at least two clichés about American politics, that it is nastier than ever and that it is not substantive. For two hours, the Republican candidates had a civil and mostly informed debate about serious issues.

It’s true: the debate was mostly civil. And although I might not have been quite as impressed as Troy was by how informed it was, I suppose that by the degraded standards of modern politics it was reasonably substantive.

But this is more a warning about what’s yet to come than a reason for celebration. I noted last night that Romney and Bachmann seemed like the obvious winners, but that was largely because neither one of them was really ever challenged or attacked. 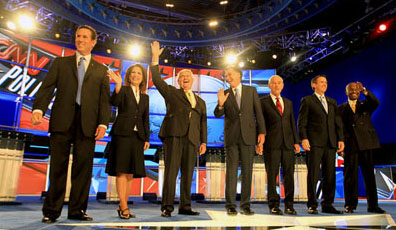 That’s obviously going to change. I doubt that last night’s debate represented some kind of turning point in American campaign civility, after all.

As Tim Murphy points out, the old school version of Michele Bachmann is still around, it was just hidden last night. It’s bound to resurface before too much longer and she’s bound to take some serious heat for saying something outrageous to one tea party crowd or another. And Romney didn’t get hit at all about RomneyCare (in fact, Tim Pawlenty actively resisted an attempt to get him to criticize Romney’s healthcare record). That’s certainly going to change too, and there’s no telling how Romney will react to it.

Basically, last night we got to see how the candidates reacted when the pressure was off and they could just make mini-stump speeches. The fact that Pawlenty couldn’t even do that very well doesn’t bode well for him. But it’s early days, and Pawlenty doesn’t have to do well on any absolute scale. All he has to do is do better than the others, and once the attacks start flying there’s no telling which candidates will wither under fire. Last night was just a bit of bullpen warmup. The show is yet to begin.