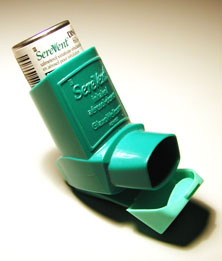 This is interesting. A few years ago, as part of the worldwide ban on CFCs to protect the ozone layer, CFC-based asthma inhalers were banned. Asthma sufferers everywhere complained about this, because the replacement HFA-based inhalers didn’t work as well. They fingered the culprits as an unholy alliance of idiot bureaucrats and overbearing environmentalists, who banned the inhalers even though their contribution to ozone destruction was minuscule and all other CFC uses had already been eliminated.

I love the ozone layer as much as anyone, but I was sympathetic to the asthma crowd. Thus I was interested to read Nick Baumann’s piece in the current issue of MoJo explaining who was behind the CFC inhaler ban. As it turns out, it wasn’t really environmentalists who made the big push, it was the manufacturers of asthma inhalers:

Pharmaceutical companies, worried about the emergence of generic competition, soon spied an opening. If they could create and patent a new variety of CFC-free inhalers, securing the exclusive rights to sell them, they could force off-brand competitors out of the market and jack up prices.

….The pharma consortium transformed from primarily an R&D outfit searching for substitutes for CFC-based inhalers into a lobbying group intent on eliminating the old inhalers. It set up shop in the K Street offices of Drinker Biddle, a major DC law firm….The lobbying paid off. In 2005, the Food and Drug Administration (FDA) approved an outright ban on many CFC-based inhalers starting in 2009.

….The switch to the new inhalers will cost American consumers, insurance companies, and the government some $8 billion by 2017, according to FDA estimates. That’s money in the drug companies’ pockets. In 2007, a top market-research firm alerted investors that the US inhaler market “will soon change from low-value to significant.” Sure enough, at nearly $1 billion a year, sales of the market-leading inhaler, ProAir, now rival Viagra’s.

Maybe the ban on CFC inhalers would have happened anyway. But even if it did, there was no special reason that it had to wipe out the generic market for asthma inhalers at the same time. So score one for big pharma. By my count, that makes the current score Big Pharma 873, Taxpayers 0.