Austin Frakt posts the chart on the right today, which shows healthcare spending as a function of GDP. The line is ramrod straight, which basically says that for 80 straight years, 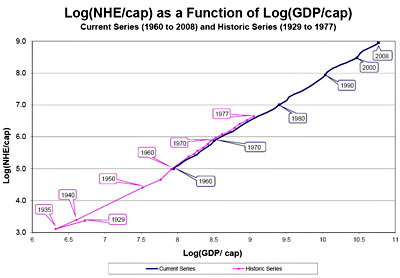 the more money we make, the more we spend on healthcare. Austin suggests there’s a lesson here:

If, by action of politicians or the market, the health care spending curve is not bent, one might argue that this reflects our collective desire, our revealed preference. The history of health care spending in the US is consistent with the hypothesis that we view health care as a luxury good, one on which we spend more of our wealth as that wealth grows….The great question [this chart] suggests to me is that if health is a luxury good, why should we expect the health spending trajectory to change?

Roughly speaking, I think this is correct. Our level of healthcare spending is higher than in other countries because we have less government control over pricing and the market has allowed various actors (doctors, hospitals, insurance companies, pharmaceutical companies) to charge much higher rates than the rest of the world does. However, the growth of healthcare spending in the United States isn’t wildly different from other advanced countries. What this says to me is that virtually everywhere on earth, when people make more money the first thing they want to spend it on is more and better healthcare. Collectively, whether via the market or via the political process, we’ve spoken loud and clear.

This will stop only when, collectively, we finally decide we’re not getting enough extra benefit for the extra money we’re spending. National healthcare systems have a built-in advantage on this score, since at least they make it fairly obvious to taxpayers just how much more they’re being asked to pony up each year. In the United States this number is much fuzzier, since it’s a combination of higher taxes, smaller pay increases at work, and rising copays.

Still, either way, healthcare costs aren’t rising because we lack discipline or because we’re stupid or anything like that. They’re rising because we want more healthcare and, so far, despite all our bitching, we obviously feel that what we’re getting is worth the price. That’s starting to change a little bit, I think — thus the modest cost controls in PPACA — but only a little. Eventually it will change more, and only when that happens will we have any real chance of getting healthcare costs under control.