Today’s jobs report sucks, as usual. CBPP’s chart is below. This is from Chad Stone, their chief economist:

Today’s very disappointing employment report shows that two years after the technical end of the recession and after 16 straight months of private-sector job creation, the jobs deficit remains huge….It makes no sense that in an economic recovery still struggling to gain momentum, policymakers are easing up on the gas and threatening to slam on the brakes. But that is just what is happening.

Ugh. That was a seriously ugly jobs report. Almost no job creation, with slow private-sector growth offset by falling public-sector employment; a falling employment-population ratio; and (I don’t know how many people have picked this up), an actual decline in wages, albeit a small one.

Let me emphasize that last point. My bottom line on the inflation-deflation issue has always been to look at wages; you can’t have a wage-price spiral if wages ain’t spiraling. And they aren’t, to say the least.

We are ruled by charlatans and cowards. Our economy is in the tank, we know what to do about it, and we’re just not going to do it. The charlatans prefer instead to stand by and let people suffer because that’s politically useful, while the cowards let them get away with it because it’s politically risky to fight back. Ugh indeed. 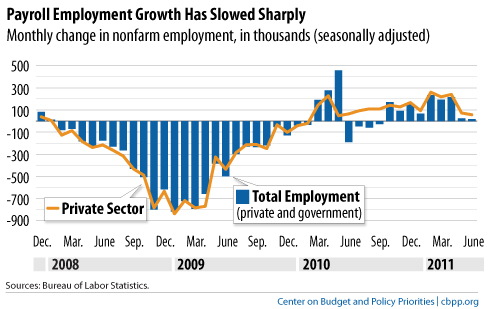