The Minnesota Republican frequently suffers from stress-induced medical episodes that she has characterized as severe headaches. These episodes, say witnesses, occur once a week on average and can “incapacitate” her 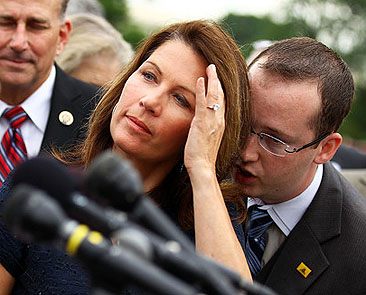 for days at time. On at least three occasions, Bachmann has landed in the hospital as a result.

“She has terrible migraine headaches. And they put her out of commission for a day or more at a time. They come out of nowhere, and they’re unpredictable,” says an adviser to Bachmann who was involved in her 2010 congressional campaign. “They level her. They put her down. It’s actually sad. It’s very painful.”….“When she gets ‘em, frankly, she can’t function at all. It’s not like a little thing with a couple Advils. It’s bad,” the adviser says. “The migraines are so bad and so intense, she carries and takes all sorts of pills. Prevention pills. Pills during the migraine. Pills after the migraine, to keep them under control. She has to take these pills wherever she goes.”

….Of particular concern to some around her is the significant amount of medication Bachmann takes to address her condition. The former aide says Bachmann’s congressional staff is “constantly” in contact with her doctors to tweak the types and amounts of medicine she is taking. Marcus Bachmann helps her manage the episodes.

I have no idea if this is really serious or not. Still, it sure sounds like something that deserves a more considered response from Bachmann’s flack than an opaque statement that her headaches are “under control” and “I’m not going to go into her medical history.” If she wants to be president of the United States, her medical history is no longer something she can just blandly pretend is no one’s business but hers. Just ask Thomas Eagleton.

UPDATE: Atrios thinks this is all stupid: “Aside from ‘imminent death is likely’ I really have never understood why people think random health issues matter.”

Look, maybe this story is wrong or overblown. If so, Bachmann can explain and it becomes a non-story. But multiple members of her staff are claiming that this “random health issue” is something that happens frequently and is incapacitating when it occurs. If it’s true, then yes, of course this matters in someone who wants to be president of the United States. I know we’re all supposed to be disgusted by the media’s relentless campaign preoccupation with minor personal issues, but sometimes these things actually matter.