David Leonhardt explains the roots of our lousy economic recovery today: “We are living through a tremendous bust. It isn’t simply a housing bust. It’s a fizzling of the great consumer bubble that was decades in the making.” True enough. 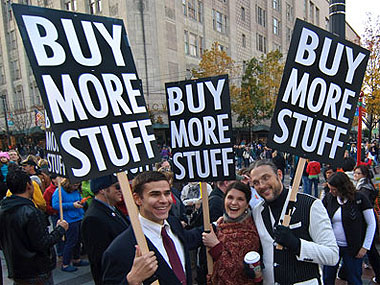 And in the short term, debt overhang and unemployment explain perfectly well why Walmart is increasingly noticing that its customers are running out of money at the end of each month. But I think Leonhardt skates over our real dilemma too hastily when he tries to turn this into a broader lesson about the economy:

In past years, many of those customers could have relied on debt, often a home-equity line of credit or a credit card, to tide them over. Debt soared in the late 1980s, 1990s and the last decade, which allowed spending to grow faster than incomes and helped cushion every recession in that period.

…The notion that the United States needs to begin moving away from its consumer economy—toward more of an investment and production economy, with rising exports, expanding factories and more good-paying service jobs—has become so commonplace that it’s practically a cliché. It’s also true. And the consumer bust shows why. The old consumer economy is gone, and it’s not coming back.

…The biggest flaw with the past stimulus was that it imagined that the old consumer economy might return.…A more promising approach could instead offer a tax cut to businesses—but only to those expanding their payrolls and, in the process, helping to solve the jobs crisis. Along similar lines, a budget deal could increase funding for medical research and clean energy by even more than President Obama has suggested. These are the kinds of investments that have brought huge returns in the past—think of the Internet, a Defense Department creation—and whose price tags are tiny compared to, say, Medicare or the Bush tax cuts.

This is fine as far as it goes, but it’s basically a Band-Aid. I know this is too simplistic to be taken seriously, but here’s my version of what happened over the past few decades:

This problem metastasized during the aughts and ended in the Great Collapse of 2008. And I don’t know how to fix it. But Leonhardt is too quick to dismiss the “old consumer economy.” Modern mixed economies fundamentally depend on consumer spending growing over time, and that only happens if middle-class incomes are also growing over time. If we don’t figure out a way to make that happen again, it’s hard to see anything we do today producing durable economic growth in the future.