The last refrigerator we had lasted about 20 years. Sometime around year 15 it finally blew out a condenser or a coil or whatever it is that makes refrigerators produce coldness and we paid $400 to have it fixed. 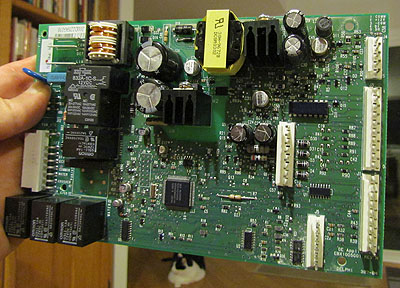 A few years later it broke again and we bought a new one.

This one broke after eight years. But not because of a condenser or a coil or something comprehensibly structural. The repair guy took about five seconds to diagnose the problem: it stopped working because the “main board” blew out. That’s it on the right. Now, maybe I’m off base on this because it’s been so long, but this looks like a butt simple design to me. One small custom chip, some relays, a transformer, a couple of heat sinks, and a bunch of passive parts. Maybe a build cost of $20-30 or so? But GE’s price to me was $250, plus $150 for the 20 minutes it took to pull out the old one and swap in the new one.

Paying $400 for a big piece of physical gear plus a couple hours of labor didn’t bother me. Paying $400 for a primitive circuit board and a few minutes to plug it in does. The repair guy laughed good-naturedly when I mentioned this. “All the computer guys say the same thing,” he told me. He even knew what I was going to say about the board before I said it. Our neighborhood is lousy with electrical engineers and other high tech weenies.

Bottom line: $400 because a $2.02 Song Chuan 832 Series 30 A SPDT 12 VDC Through Hole General Purpose Heavy Duty Power Relay burned out. So here’s your economics question for the day: Did I stimulate the economy today? Or this an example of the broken refrigerator fallacy? Or did most of my consumption spending leak out to China? Please phrase your answers in the form of a koan.